A+ A-
Print Email
The #1 iOS game in China with over 10 million players, now available in English!

Taichi Panda is a fast-paced Kungfu-themed dungeon crawler. Grow your character and restore the cosmic balance in an exciting free-to-play online adventure. 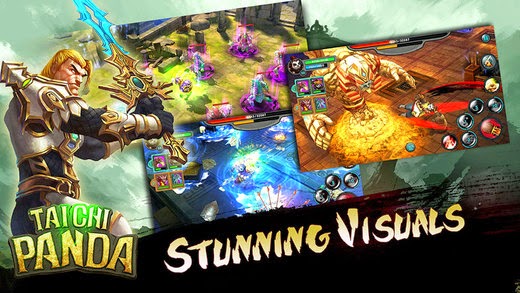 TouchArcade – “Taichi Panda has all the necessary components that make up a great hack 'n slash action game.”


148Apps – “The game looks like it has some pretty nice graphics and fast play style.”

Enter a world of goblins, bandits, and pandas as you adventure through graphically stunning maps in full 3D environments. Bash your way to the center of the mystery with a fast and fluid animation style built on full-body motion capture.

Fight through hordes of enemies with a fast-paced combat system. Use a mixture of speed, strength and skill, combining aerial attacks and combo moves to devastate the enemy. Explore twisting labyrinths, avoid precarious traps, and defeat powerful bosses!

Level up your character to unlock powerful new abilities. Upgrade and refine your gear to bolster your power, and unleash elemental magic through ancient runes. Develop your Pets, special battle companions with their own unique progression and skills.


Play in Real-time with Friends

Play in real-time multiplayer with friends and strangers. Become the ultimate Taichi champion with PvP arenas and battlefields. Team up with fellow adventurers in group dungeons to face off against formidable Bosses.