As Yemen bombing subsides, Saudi may struggle with peacemaker role

A+ A-
Print Email
Saudi Arabia has bombed Yemen for four weeks but may be little closer to imposing influence in its war-torn neighbor. 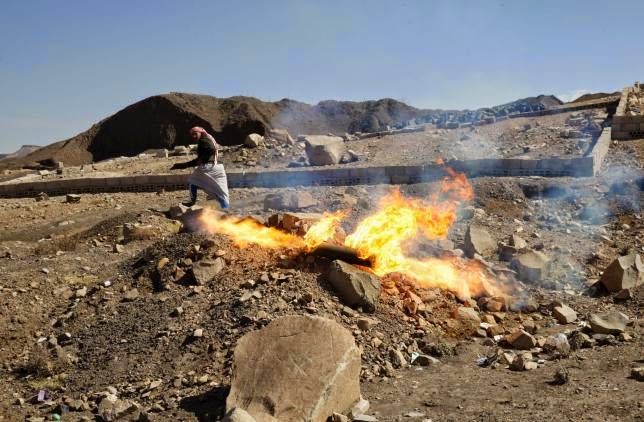 A man flees after igniting an unexploded shell which landed from a nearby missile base after the base was struck by a Saudi-led coalition air strike, near Sanaa April 23, 2015.

As the kingdom winds down the campaign it led against Yemen's Houthis, a militia allied to its regional rival Iran, Riyadh faces a test of its diplomatic skills in trying to arrange talks among Yemen's fractious elites.
The bombs have helped prevent the Houthis from fully seizing Aden, Yemen's main port, but have yet to reverse their decisive military gains over recent months, when they took the capital, joined forces with army troops loyal to former leader Ali Abdullah Saleh and emerged as the country's most powerful force.


Saudi Arabia says it has stopped its main air campaign but will still bomb Houthis and Saleh loyalists if they make military moves. Air strikes have not ceased but their pace has declined.
Meanwhile, the war has made tens of thousands hungry and homeless, and has given Yemen's branch of al-Qaeda - long a target of secret U.S. CIA drone strikes - more room to operate. Tribal chiefs, some with past ties to al Qaeda, have emerged as the dominant force in an oil-producing eastern province.
Most awkwardly for the kingdom, the Houthis are still locked in battle throughout southern Yemen with supporters of Saudi-backed President Abd Rabbu Mansour Hadi, now exiled in Riyadh.
While Saudi Arabia can take comfort from Washington's decision to send an aircraft carrier to help block any Iranian arms shipments to the Houthis, the ships and bombs may not help it put the shattered country back together.
Supporters of the Yemen intervention say it marks the moment Riyadh took the initiative after years of growing Iranian regional clout. It had little choice as the Houthis surged toward Hadi's last foothold in Aden.
But critics say the strikes were launched with little advance thought given to securing an eventual political settlement, given that the Houthis and Saleh were never likely to be decisively defeated from the air.
Saudi leaders were motivated by "a need to show force, to basically kick ass and show they could handle their own national interest without waiting for the U.S.," said Rami Khouri, a political analyst at the American University of Beirut.
Assertive policy
Long a "soft power" heavyweight due to its vast oil wealth, the kingdom has relished taking on a lead role in a regional war in which it spearheaded an alliance of Sunni Muslim countries against the Shi'ite Houthis.
As Washington has grown less willing to deploy its forces in the region, Riyadh's ruling princes have started to adopt more assertive regional policies.
Yemen was the first big test for King Salman and his ruling team after the death of his half brother and predecessor Abdullah in January.
Leading Saudi commentator Jamal Khashoggi said the kingdom has been emboldened by the success of the venture in limiting Houthi expansion.
"If it weren't for the Saudi intervention, the country would be totally under the Houthis," Khashoggi said.
Support for the kingdom still runs deep in Yemen's embattled south, where local fighters have withstood Houthi advances across hundreds of miles, backed by Saudi raids and arms drops.
Posters of King Salman and fluttering Saudi flags adorn checkpoints manned by armed youths in Aden, the southern port where residents welcome the continued air strikes.
"The southern resistance had the will but not the means to fight the Houthis. The Saudi air campaign succeeded in this in a big way by blocking the Houthis from an easy victory, and southerners are happy that it will continue," said Mahmoud al-Salmi, a professor at Aden University.
Hurt image
Diplomats say the Saudi campaign succeeded in destroying much of Yemen's missile and air power, removing the threat of a sophisticated counterattack on the kingdom or its Gulf allies by units loyal to the Houthis or Saleh. Riyadh has cited that achievement for winding down the campaign.
But there appears to be less reason for triumphalism in Riyadh than in the early, heady days of the air strikes. Over the weeks, it became clear that Pakistan and Egypt, the most populous countries with the biggest militaries in the Saudi-led alliance, would offer only token participation in the effort.
The blockade by air and sea, led by the Arabian Peninsula's richest country against its poorest, has led to a warning by the International Committee of the Red Cross that Yemen's humanitarian situation is "catastrophic".
Diplomats say a similar humanitarian assessment, along with the emboldening of al Qaeda, led Washington to call for a pause.
"Saudi Arabia must have felt this was hurting their image in the West. But their blockade continues - trade and food imports are still cut off - so this mission change just distracts the media," Yemeni writer and activist Farea al-Muslimi said.