Both World Bank, IMF voice willingness to cooperate with AIIB

A+ A-
Print Email
The heads of the World Bank and the International Monetary Fund (IMF) said Thursday that they are willing to strengthen cooperation with the Asia Infrastructure Investment Bank (AIIB) to unleash the huge potential in the region. 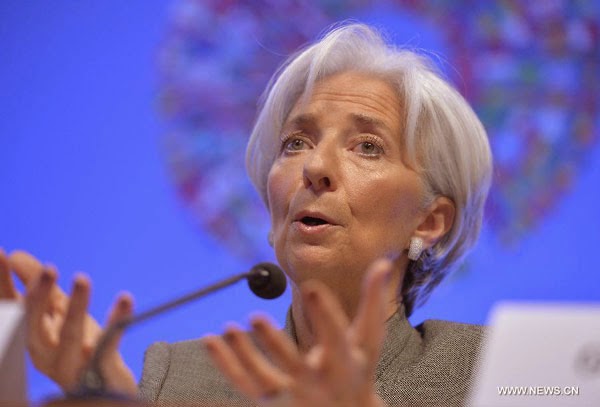 "Infrastructure needs in the developing world are enormous. They are enormous in Asia for AIIB. Our full expectation is we will continue to work closely," said World Bank President Jim Yong Kim at a press conference ahead of the WB-IMF Spring Meetings.
While answering questions put forward by Xinhua, Kim said the World Bank has much more technical expertise than the AIIB has right now, and has every reason to do project preparation in collaboration with the AIIB.
"It looks like it may be in early days. Right now we are still waiting to see what exactly the AIIB will be doing," he added.
Christine Lagarde, managing director of the International Monetary Fund (IMF), said at the press conference Thursday that the proposal to have a completely dedicated institution that will focus on infrastructure on the regional basis is actually an attractive proposition.
"That is a welcome regional organization, the one which the IMF certainly is planning to cooperate," she said.
The China-proposed AIIB aims to finance infrastructure projects in the Asia region. China's Ministry of Finance said Wednesday the prospective founding members of the AIIB finalized at 57, covering five continents, including Asia, Oceania, Europe, Latin America and Africa. Preparation for establishment of the AIIB are gaining momentum as a succession of intensive talks are on the horizon. With the signing of a charter slated for the end of June, the AIIB looks set to be launched by the end of the year.
Both Kim and Lagarde made the remarks as emerging economies are gearing up for opening multilateral institutions on their own, amid their growing grievances over the existing global institutions' inaction to implement the reform to reflect the growing influence of the developing nations.
To reflect the growing and underrepresented influence of emerging economies, the IMF called for a 6 percent shift in quota share to the emerging economies in 2010. However, the reform has been delayed for five years due to blocking by U.S. Congress as the United States retains a veto.
"I can fully understand why some other countries are frustrated and impatient to see that reform implemented," Lagarde said, calling on the United States to ratify the IMF 2010 quota reform plan to make the global lender continue to be representative.
The IMF is seeking to pass an interim program this year, as the final passage of the reform remains distant.
Lagarde said Thursday that the IMF welcomed the fact that the emerging economies launched a multilateral institution, and Kim congratulated China on "taking such a bold step in the direction of multilateralism."
The WB-IMF Spring Meetings are scheduled to open from April 17- 19 in Washington D.C.. The meetings gather central bank governors, finance ministers and scholars from different countries of the world to discuss key global economic issues and policy actions.
Source: Xinhuanet