Can Sex Mess with Your Athletic Performance? 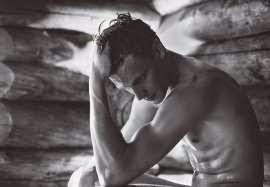 There is an old belief that seminal fluid, the stuff of life, gives men their strength, courage, and athleticism. Thus, one should not give in to sexual desires before a big game. The custom dates back to ancient Greece —they refused to give it up prior to any competition.


Fast-forward a couple millennia, and while most guys don't consider the stuff to be the root of all things masculine (some Papua New Guinea tribes do still require boys drink it to become men, according to the International Encyclopedia of Sexuality), we have largely held onto the notion that sex screws with athleticism. "It's a widely held belief, especially within the fighting community, that not 'releasing' will build up a man's aggression," says personal trainer Mike Donavanik, C.S.C.S, C.P.T. "It will make him tenser, more easily agitated, more aggressive." Sylvester Stallone's character even abstained in Rocky .
Other proponents of pre-game abstaining believe that sex just tuckers guys out, causes sore muscles, or even results in injury, Donavanik says.
Truth be told, none of those worries are backed up by science, so Rocky blue-balled it for no reason, says Pamela M. Peeke, M.D., a spokesperson for the American College of Sports Medicine. As have countless other fighters, Olympic athletes, and most recently, a whole slew of World Cup teams , including Russia, Chile, Mexico, and Bosnia, and Herzegovina.
"Sex tends to boost testosterone, which is what you'd want in an athlete," Peeke says. In fact, she notes that in men who go just three months without sex (with a partner or solo), their testosterone levels drop to near-pre-puberty levels. Yikes.
If you think about it, even if you're going at it up against the wall, across the dining room table, and contorted in the shower, it's pretty damn difficult to work so hard during sex that you'd be sore the next day for a basketball game or half marathon, though you can burn a lot of calories. Clearly the Brazilian soccer team's recent ban on "acrobatic sex" (so, no hanging from the chandeliers?) during the World Cup probably didn't pay off.
Surprisingly, sexual release can actually combat pain when you're going into a game. The reason: When men orgasm, their bodies release a power combo of dopamine and prolactin, which can hijack your brain to make you feel less pain, Peeke says.
Not to mention a whole lot less sexually frustrated.
Nhãn: Health-Science