A+ A-
Print Email
Final clinical trials of a malaria vaccine - the first to reach this stage - suggest it could help protect millions of children against malaria. 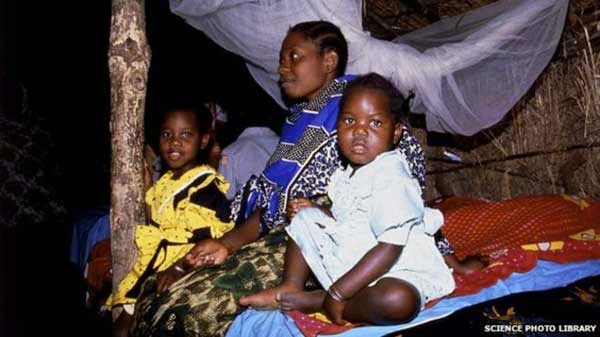 But tests on 16,000 children from seven African countries found that booster doses were of limited use and vaccines in young babies were not effective.
After children aged 5-17 months were given three doses of the vaccine, the immunisation was only 46% effective.
But experts say getting the vaccine this far is a scientific milestone.
Data from the trial published in The Lancet showed that the success rate fell to even lower levels in younger infants.


Scientists have been working on the vaccine for more than 20 years, but observers believe there is still a long way to go.
RTS,S/AS01 is the first malaria vaccine to reach advanced trials and show any sign of working in young children.
There is currently no licensed vaccine against malaria anywhere in the world.
With around 1,300 children dying in sub-Saharan Africa from malaria every day, scientists say they are delighted to have got to this stage in developing a vaccine against a very clever parasite.
'Disappointed'
Prof Brian Greenwood, study author and professor of clinical tropical medicine at the London School of Hygiene and Tropical Medicine, said he was "a little disappointed" by the results of the clinical trials.
"I hoped the vaccine would be more effective, but we were never going to end up with the success seen in measles vaccines with 97% efficacy."
That is because the malaria parasite has a complicated life cycle and it has learnt how to evade the immune system over hundreds of years.
The vaccinations took place at 11 sites across Burkina Faso, Gabon, Ghana, Kenya, Malawi, Mozambique and Tanzania.
The trials found the vaccine's ability to protect children gradually waned over time.
Scientists tried to bolster this with a booster, but protection never reached the level provided by initial doses.
The clinical trials also found that meningitis occurred more frequently in children given the vaccine.
However, Prof Greenwood said the data was very robust and the vaccine could still reduce attacks of malaria by around 30%.
'Milestone'
The European Medicines Agency will now review the data and, if it is satisfied, the vaccine could be licensed.
And the World Health Organization could then recommend its use in October this year.
Prof Adrian Hill, at the University of Oxford, said although the study was "a milestone", he had concerns.
"Because the vaccine's efficacy is so short-lived, as expected a booster dose is shown to be of some value - but it was not as effective at the initial doses.
"More worrying is the new evidence of a rebound in malaria susceptibility: after 20 months, vaccinated children who were not boosted showed an increased risk of severe malaria over the next 27 months compared to non-vaccinated controls."
Overall, he said the vaccine's potential public health benefits were not yet clear.
"It should be possible to make the vaccine more effective in some settings, but that will probably increase delivery costs substantially."
'Important tool'
Prof Mike Turner, head of infection at the Wellcome Trust, said it had taken two decades to get to this point.
"While the levels of protection the vaccine offers against clinical malaria may seem relatively low, they are better than any other potential vaccine we currently have.
"The findings are not only important in their own right but also in signposting a road to developing better vaccines in the future."
James Whiting, from the charity Malaria No More UK, said it was a huge achievement to get the vaccine this far.
"There are still a number of considerations and approval processes to be undertaken, but it has the potential to be an important additional tool to fight malaria and save lives from a disease that kills a child every minute."
Other experts warned that funding for a vaccine should not be redirected away from insect nets and other malaria control measures.
Source: BBC
Nhãn: World-Region