Chris Paul takes over for Clippers in crucial win vs. Spurs

A+ A-
Print Email
SAN ANTONIO — As coaching problems go, the Los Angeles Clippers' Doc Rivers knows this is a good one to have.
His point guard — or as some have nicknamed Chris Paul in NBA fan circles, "Point God" — is so talented in so many different ways that the question of how to maximize his impact doesn't always come with an easy answer.
He's a pass-first playmaker who looks at scoring as a last resort, never mind the fact that he's capable of channeling his inner Russell Westbrook from time to time or even reminding his 53-year-old coach of those old match-ups against the great Isiah Thomas.
So after Rivers saw Paul score 30-plus points for the second time in this first-round series against the San Antonio Spurs on Sunday, the Clippers tying it up at 2-2 by way of a 114-105 win at the AT&T Center, it surprised no one who knows the back story here that the coach felt a tremendous sense of relief. 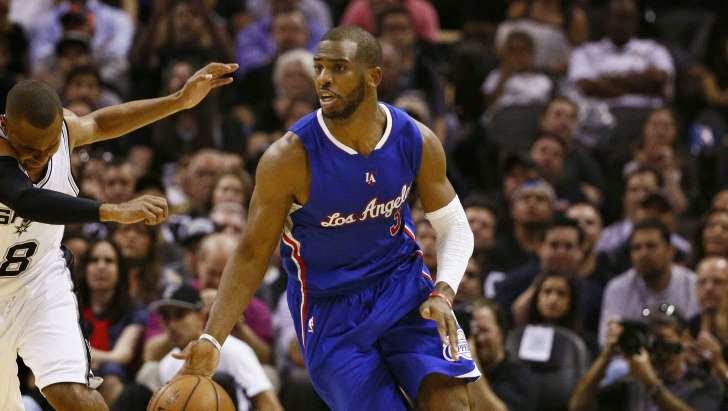 © Soobum Im, USA TODAY Sports Soobum Im, USA TODAY Sports
"He's a great scorer," Rivers said with a smile as he stood outside the visitor's locker room. "I mean, he's not a good scorer. He's a great scorer. And to tell him that and convince him that, (he'll say), 'Yeah, I know. I know.' But he doesn't see that. He sees himself as a great passer, and it's a (expletive) to get him to do it. ... It's just his nature. It's (like the fable) 'The Frog and the Scorpion.' And we need him to be the scorpion."
Paul should be more willing than ever to be the scorpion now.
His 34 points came against the stubborn likes of the Spurs' Tony Parker, Kawhi Leonard and Danny Green, Paul finishing one point shy of his career-high in the playoffs as he hit 11-of-19 shots in all. The way in which he did it at the end only made it all the more impressive.
Paul was whistled for his fifth foul with 8:25 left to play and the Clippers up 93-84, but he played all but 46 seconds from there while scoring 10 points during that stretch — four free throws and three pull-up jumpers from mid-range helping seal the deal. And as was the case in the Clippers' Game 1 win, when Paul had 32 points and the Spurs seemed overmatched on nearly every front, he set the offensive tone with the kind of aggression that Rivers wishes he saw more often. With Game 5 coming on Tuesday in Los Angeles and the Clippers having re-gained homecourt advantage, it's quite clear that they need Paul to keep heeding Rivers' advice.
"For me, I just try to play the right way," said Paul, who received key help from forward Blake Griffin (20 points and 19 rebounds) and J.J. Redick (17 points). "When the shot's there, I try to take it. I try not to force things, try to make the right pass and stuff like that. Against (the Spurs) at times, I don't know. I watched film yesterday and I saw a couple times where I may have been able to shoot it in Game 3, but tonight it was just the ball movement. It's not so much you're just trying to iso (isolation) or stuff like that. Today we just played with the right pace. It was the tempo, and that's what got (him) shots."
Paul, the 29-year-old who had a combined 28 points in the Clippers' losses in Games 2 and 3, has now scored 30-plus points in just 10 of the 57 playoff games in which he has played. It's a rare feat, to be sure, but one that typically boded well for his teams in both New Orleans/Oklahoma City and Los Angeles as they were 8-2 in those games.
During his Clippers tenure, Paul has now scored 30-plus points in four of 34 playoff games (they're 3-1 in those games). It may not be the cure to all these playoff ails he has suffered from since entering the league in 2005 — six postseason appearances, three first-round losses and nary a Conference finals appearance — but it's clearly not a bad way to go.
What's more, it's the result of a project that Rivers appears to have put in play back in late January:
When the Clippers made their surge in the second half of the season, Paul's scoring spiked (21 points per game on 15.3 shots per game after Jan. 25 compared to 17.3 points on 13.3 shots per before then) in large part because Rivers wanted it that way.
When the Clippers lost all the momentum that came with their dynamic Game 1 win, the debate about what's missing from their top-tier team began anew among fans and media alike. The most logical culprit is their bench, of course, and that's a substantive stance to take. Beyond super sixth man Jamal Crawford being his usual self this season, the Austin Rivers/Spencer Hawes/Glen Davis/Hedo Turkoglu group has underwhelmed at every turn. This was a rare exception in that regard, as Austin Rivers had 16 points off the bench (7-of-8 shooting) and Crawford added 15.
But Doc Rivers — who comes under fire in that regard because he's also the team's vice president of basketball operations — pushed back against that notion leading up to Game 4. It's not that he doesn't agree with the premise that the bench has been a problem. It was, as Rivers explained, just not the problem.
"All year (it has been a problem), and what's our record?" he asked an inquiring reporter who acknowledged that 56-26 was an impressive mark. "Thank you. I'll leave it at that."
These stars, the ones who created the entertaining community known as Lob City but who have fallen short in these past three playoffs, simply weren't getting the job done as he saw it.
"Name me a series where your key players didn't play well and you win the series," Rivers continued. "That's the key to the playoffs. Your key guys have to play well."
Paul more than the rest.
Follow Sam Amick on Twitter @sam_amick.
Nhãn: Sport