A+ A-
Print Email
CONOR MCGREGOR stepped up his mind games with upcoming opponent Jose Aldo as their UFC press tour rolled into Dublin yesterday.
After McGregor whipped his expectant audience into a frenzy as he took to the stage shared with defending champion Aldo and head of the UFC Dana White, he motioned to someone to ‘press play’.
Knowing Aldo was going to be in Dublin for yesterday’s press conference, the video shown at the press conference revealed McGregor had taken the red eye to Rio late Monday night and burned down Aldo’s house with his wife and daughter still in it. 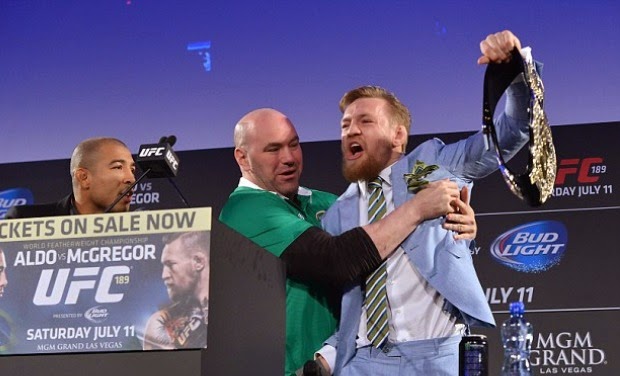 “I will consume you like the affordable biscuit you are,” McGregor said as he jumped on the table, then taking the time to produce a picture of Aldo’s wife and subsequently urinating on it. This was disrupted however by an over eager fan who attempted to get McGregor to urinate on him.
Laughing maniacally at this point to raucous applause and chants, McGregor added “she’s dead Jose, upon your return to your favela a beaten man, you will sleep alone like some sort of unlovable cucumber that cannot find itself a suitable salad”.
While the murder of Aldo’s wife and child certainly heightens the tension around the fight, many have speculated that McGregor may now be edging the mind games.
“Ha ha, what will he do next? You just don’t know with this guy, he’s all class. He has the warrior spirit and I think this has frightened Aldo and rattled him,” explained UFC expert Josh Pleasant.
McGregor fans in crowd added to the tension as they bellowed chants of ‘your family’s dead’ resulting in Aldo breaking down in tears.
Our sources confirm Aldo will still fight McGregor but has taken several days off from training in order to bury and mourn his family.
“What can I say, Conor is box office baby,” explained Dana White as he shrugged off questions about McGregor’s actions.
Nhãn: Sport