Buy banner here for $75/week
Home » Sport » For Floyd Mayweather Jr., money counts as much as anything

For Floyd Mayweather Jr., money counts as much as anything

A+ A-
Print Email
LAS VEGAS — Two of Floyd Mayweather Jr.'s favorite possessions are his cash and the zero on his won-loss record.
With Saturday's fight against Manny Pacquiao looming to boost his bank account and threaten his unbeaten standing, Mayweather said Tuesday he prizes one more than the other.
"At the end of the day, my daughter can't eat no zero — she can't spend a boxing record," Mayweather said following his lavish arrival inside the fight's venue, MGM Grand Garden Arena, with his Mercedes van led in by the Southern University marching band. 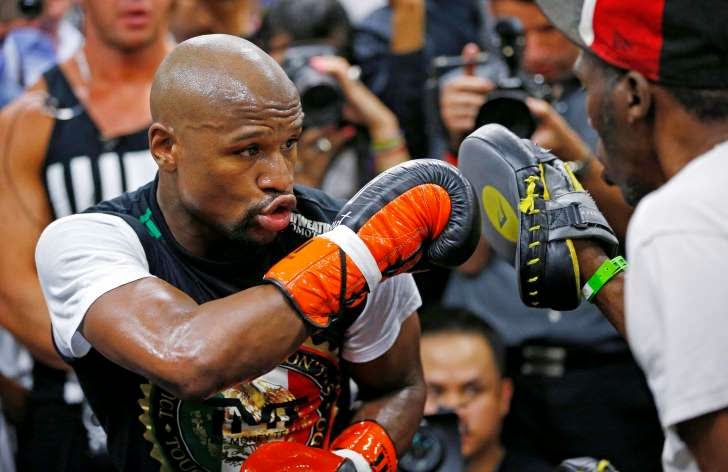 © John Locher/AP Photo Floyd Mayweather Jr., left, works out with his uncle Roger Mayweather on Tuesday, April 14, 2015, in Las Vegas. Mayweather is scheduled to face Manny Pacquiao in a welterweight boxing match in Las Vegas on May 2.


"The great thing about my career is that I'm a smart businessman. Let's talk about that. Nineteen years, no punishment on the body, hundreds of millions. ... She can eat with the money."
Mayweather (47-0, 26 knockouts) said he expects to earn "upwards of $200 million," in the pay-per-view bout that is expected to shatter boxing revenue records.
"Five years ago, this was a $50-million fight for me," Mayweather said. "I want you guys to say Floyd is the smart one."
He said his associates reported that he'd made $11 million within the last 48 hours, declining to specify how, although the fighter was given multiple hundreds of tickets for the fight, which are being offered at more than $130,000 apiece on the secondary market.
In a reflective, extended discussion with reporters, Mayweather touched on multiple issues, including his pursuit of an undefeated career, some chiding of Pacquiao and even another unfortunate reference to the mother of three of his four children.
He said he plans to give $50 million apiece to three of his children after this fight, but said he misses them while they're under the custody of their mother, Josie Harris. Mayweather's domestic violence against Harris led to his being jailed for nearly three months in 2012.
"It's been bothering me a lot that, three of them, I haven't been able to see. You know how women are sometimes," Mayweather said.
As for the fight, Mayweather said he's unsure what Pacquiao's fight plan will be, but he is confident he can handle it.
"Every (opponent's) game plan is to come forward and throw a lot of punches. ... It hasn't worked in (18) years, 47 fights ... but if that's the game plan, we'll have to see how it breaks down," Mayweather said.
Some of his confidence, he said, comes from the fact Pacquiao was knocked out in 2012 by Juan Manuel Marquez, the same man Mayweather dominated by unanimous decision in 2009.
"I truly believe I'm a more calculated, a smarter fighter," Mayweather said. "He would be a better fighter if he wasn't so reckless. He's won fights being reckless, but you can be reckless and get knocked out. And getting knocked out in a harsh way can affect you in the long run.
"The great thing about my career — people have criticized me about being a defensive fighter — but last night when I was at home sitting with my mother and daughter, I thought to myself, 'I'm proud of myself. To be in a sport for 19 years, the main thing is I'm going to be able to get out of the sport and still be sharp, have a sharp mind.'
"I wasn't involved in a lot of wars. Wars are wear and tear on your body. To still be sharp, to have all my faculties, to make sure my children's children are secure, that's what's important."
He said he plans to fight again in September, even though his contract with Showtime gives him the flexibility to also retire after this most lucrative bout of his career.
"I'm loyal, a man of my word," Mayweather said.
If he wins both remaining bouts, he'll match the late former heavyweight champion Rocky Marciano's record of 49-0.
"Two fights left. Rocky Marciano's a hell of his fighter in his era ... legendary champions paved the way for me," he said. "Right now I'm TBE (The Best Ever) and before and after the fight I'll still be TBE. One fight don't define my career, it don't make me."
People, Mayweather maintains, will remember his body of work and opinionated style.
"I'm glad I was outspoken, flashy, but now I'm close to that big 4-0 — very close — so I look at things totally different," Mayweather said. "I don't have to come in here and bash Manny Pacquiao.
"I know what I can do."