A+ A-
Print Email
The search for survivors of Nepal’s deadly earthquake entered its third day as countries rushed aid to one of Asia’s poorest economies and international relief agencies warned of the rising risk of water-borne disease. 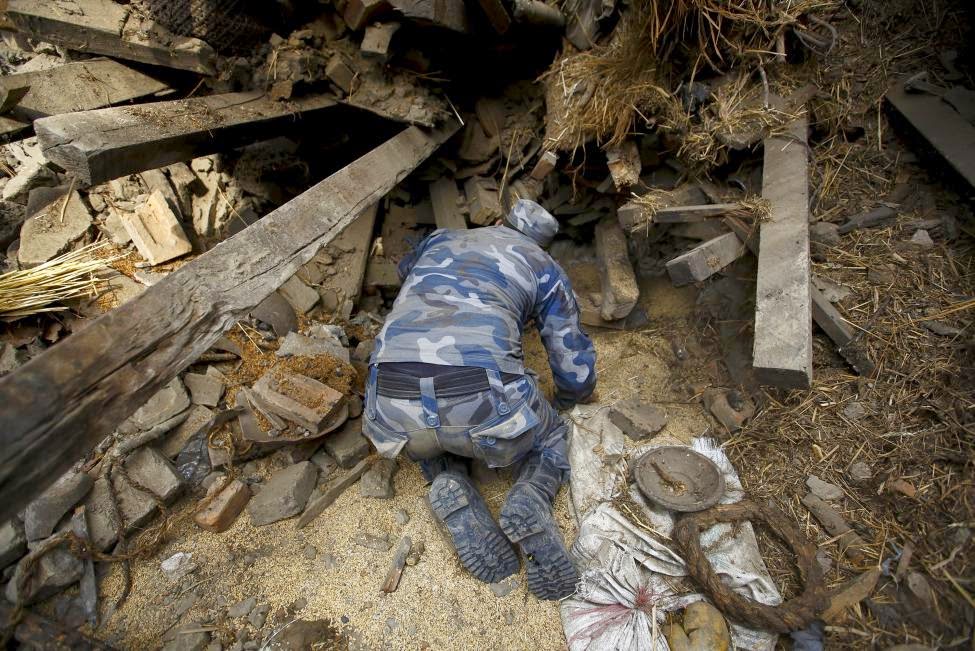 Rescue team member works to dig out the trapped body of a woman from a collapsed house in Bhaktapur, April 26, 2015.

Dozens of aftershocks -- including one that reached a magnitude of 6.7 -- hindered rescue efforts with around 50 tremors logged since Saturday’s magnitude 7.8 earthquake, adding to the chaos as panicked residents avoid returning to damaged homes. The quake killed more than 2,300 people and injured as many as 5,000, with the toll still rising.


Rain has slowed power restoration and other relief efforts, including the clearing away of corpses. The main quake that struck shortly before noon on Saturday triggered avalanches on Mount Everest, killing at least 19 foreign climbers including a Google Inc. product manager.
“Time is of the essence for the search and rescue operations,” United Nations under secretary-general for humanitarian affairs Valerie Amos said in a statement. Many people have slept in the open for two nights and require food, water and emergency shelter, while at least 940,000 children live in areas severely affected by the earthquake, the UN said.
The International Monetary Fund, humanitarian groups and governments from China to India to Israel rushed to provide assistance to Nepal, one of Asia’s poorest countries. While the temblor also downed buildings and took lives in neighboring India, Tibet and China, it was Nepal that suffered the brunt.
Cholera fears
“We need the ability to bring clean water to the people that need it most, in a place where cholera is endemic,” Chris Skopec, a senior director of emergency preparedness at the International Medical Corps, a nonprofit relief agency, said on CBS television’s “Face the Nation” program on Sunday.
The U.S. Geological Survey initially estimated economic losses to Nepal from the quake at 9 percent to 50 percent of gross domestic product, with a best guess of 35 percent.
Tourism is a key economic driver for Nepal, which has a gross domestic product that is smaller than any of the 50 U.S. states. Its 28 million people have the lowest spending power of any Asian country apart from Afghanistan, IMF statistics show.
At Mount Everest, many climbers remain stranded in two camps above the base camp, said Zimba Zangbu Sherpa, a former president of the Nepal Mountaineering Association. The injured and survivors are being airlifted from the base camp to Kathmandu, according to Ang Tshering Sherpa, the association’s current president.
Rain forecast
Widespread rains are forecast to hit Nepal over the next 24 hours, threatening to further hinder relief efforts, the India Meteorological Department said on Sunday. It warned citizens to be beware of possible landslides.
“People will be terrified to be indoors. It means then that people will be exposed the the elements,” Orla Fagan of the UN Office for the Coordination of Humanitarian Affairs said on “Face the Nation” from Bangkok.
Damage to Nepal’s water and sewage systems raises the possibility of water-borne diseases, Fagan said. “At this stage we’re talking about really life-saving response.”
Neighboring India will rush more relief and rescue personnel to Nepal and increase supplies of medicine and food for the quake affected, Foreign Secretary S. Jaishankar told reporters in New Delhi on Sunday. The country will also set up medical camps along its border with Nepal, he said.
The Japanese government sent a rescue team while the U.K. dispatched more than 60 search and rescue and medical experts. Secretary of State John Kerry said the U.S. would provide $1 million in aid while USAID was readying a disaster response team alongside an urban search and rescue team.
Gear tossed
A website backed by the International Committee of the Red Cross listed hundreds of foreign tourists in Nepal who remained missing. Google said it had started a “person finder” tool to help track people missing in the earthquake, and would commit $1 million to its response.
Daniel Fredinburg, an executive with Google’s privacy team and self-described “adventurer/engineer,” died of a head injury on Mount Everest, his sister wrote on the social media site Instagram.
“Some duffels from expedition members were tossed for more than a football field’s length. Expedition boots, dining tent frames, and ice axes were tossed far across the glacier too,” U.S. climber Jon Kedrowski wrote on his blog Sunday about the mayhem at basecamp.
Hundreds of people attempt to reach Everest’s summit each year, typically paying a minimum of $30,000 per person and often far more for the privilege, according to an estimate by Outside magazine. The rising numbers of climbers has drawn complaints about overcrowding, littering and heightened danger. April is a peak month for climbing.
Weak structures
Many Nepalese live in unreinforced brick masonry structures. The country’s shoddy building standards and lack of preparedness for a major earthquake were the subjects of an international conference in Kathmandu earlier this month.
Television images showed rescuers pulling out people who were trapped under the 19th century Dharahara Tower, a nine-story structure in Kathmandu that collapsed.
“It was so powerful and the entire house was shaking, so we got out,” said Sila Gurung, 28, who lives in a three-story home with her mother in Kathmandu’s Nakhipot district, close to the popular tourist site Patan Durbar Square. “Everyone is very scared, and no one knows when it will be safe to go back home.”
The Himalayan region is one of the world’s most active seismic zones as the Indian subcontinent pushes north into the central Asia tectonic plate. The 1934 earthquake in Nepal, just west of Sikkim, killed more than 16,000 people. A 2005 quake in Kashmir killed more than 70,000 in Pakistan.