A+ A-
Print Email
THAT GUY in the wheelchair you’ve been staring at for the last five minutes purposely made eye contact with you just there to make you feel uneasy, he admitted later today.
Liam McDermott, who shattered his lower vertebrae in a road collision in 1998, said he could feel someone staring at him while he was eating his lunch with girlfriend Janet Kennedy, and just had to turn around. 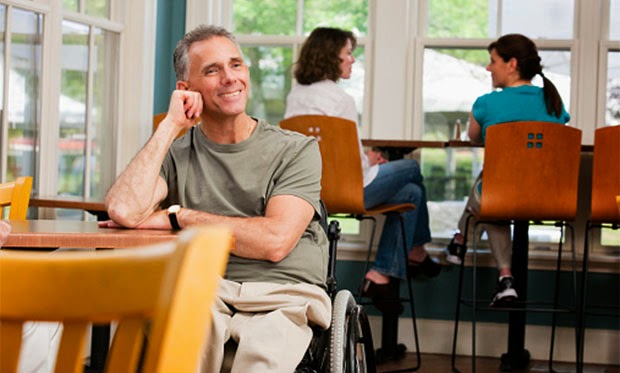 “I caught him lovely,” claimed McDermott, who said he enjoys the awkwardness of it all. “Of course, I did it on purpose. I mean, I could have just left them stare at me without turning around, right? But no, not me. Apparently, I have a huge chip on my shoulder and love making people feel uneasy. Because that’s how all us wheelchair lads roll; we just love to catch out walkers looking, judging, and feeling sorry for something that’s not their fault”.
Admitting to the sarcasm, the son-of-two explained that he actually doesn’t mind people’s curious stares, stating the years since the accident have given him a “thick-skin”.
“I had moved tables to get a better look at him, he caught me rotten but making eye contact with me was uncalled for,” the intrusive onlooker Daniel Murphy told WWN, now visibly shaken by the incident.
McDermott admitted his awkward eye contact method is not without its guilt.
“I just feel sorry for people who feel they have to avoid making eye contact. It happens everyday,” he said. “Then some people over-compensate and treat me like a child, being too nice and obliging. They’re the worst”.
“I’d just like to say sorry if I made him feel uncomfortable earlier,” he concluded before peering past this interviewer’s shoulder to catch someone else who was looking on out of the corner of his eye in an awkward stare.
Nhãn: Lifestyle