A+ A-
Print Email
Only 22 out of 35 central hospitals signed contracts with environment service companies on treating solid waste, while another 13 hospitals treated the waste themselves. Of these, six treated waste with incinerators and seven with chemicals. 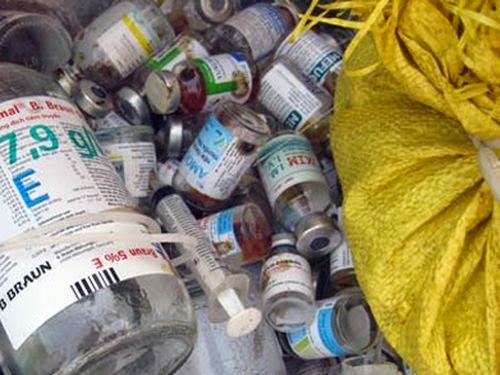 The information has been released by the Medical Environment Management Agency, an arm of the Ministry of Health.

The agency, during a recent inspection tour, discovered many problems in the process of waste collection, classification and treatment.

Some hospitals have been found using antiseptic products not licensed by MOH. The Thai Binh Medical University’s Hospital has been found as keeping solid waste longer than allowed, while Hospital E did not have storehouses for keeping infectious waste.

Inspectors also found problems at the Vietnam-Germany Friendship Hospital, one of the Vietnamese largest hospitals: its measures created to handle sharp objects were not safe enough.

The inaccurate observation of the regulations in waste collection and treatment explained why the waste water samples at hospitals all showed high E.coli contents. The inspectors even found used injection needles and medicine bottles left at medical officers’ desks.

Dr. Nguyen Thanh Ha, deputy head of the MOH’s Medical Environment Management Agency, emphasized that the heads of hospitals have the responsibility of taking necessary measures to protect the environment in the areas where the medical centers are located.

However, the waste collection and treatment have not been implemented in the right way. Therefore, the medical waste at hospitals could be the pathogenic sources which spread diseases in the community. Meanwhile, the incinerators at hospitals are believed to be the “factories” that produce dioxin.

Ha stressed that it is urgently necessary to check if the incinerators at hospitals operate properly.

A local newspaper quoted a Vietnamese scientist as affirming that all incinerators in Vietnam produce dioxin because they utilize outdated technologies.

Nguyen Huy Nga, former head of the Environment Department of the Ministry of Health, said the incineration technology has been banned in many modern countries because it is considered “dirty” technology that harms human health.