How Recreational Pot Can Make Everyone Happy 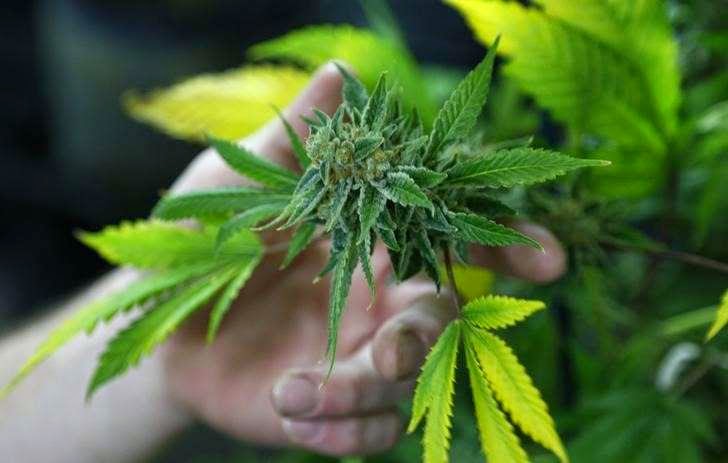 © REUTERS/Rick Wilking A fully budded marijuana plant ready for trimming is seen at the Botanacare marijuana store ahead of their grand opening on New Year's day in Northglenn, Colo., December 31, 2013.
Marijuana, for most of its recent history, has been defined by skepticism and negative stereotypes. And why wouldn’t it be? Its use, along with LSD, is tied closely to the hippie counterculture of the 60s and 70s, which rejected mainstream societal structure and values and looked to these drugs for expanding consciousness. The 1980s’ War on Drugs, supported by the Drug Enforcement Administration (DEA), the National Institute on Drug Abuse (NIDA), and various parents organizations, soiled its reputation further, persuading the American public that using it will sap motivation, lead to experimentation with harder drugs, and cause criminality.

For many years the public bought into this story. The majority of Americans perceived marijuana in a  light consistent with that of marijuana opponents and the 1980s War on Drugs. Support for legalization went from about a third of Americans in 1978 to 16 percent in 1990; their lowest point in history, according to a CNN/ORC poll. Since then, however, slowly but steadily that support has grown, and in 2014 it commanded the majority for the first time in history, with 53 percent of Americans saying it should be legal, the Pew Research Center found.
This support represents a sea change in the way people are viewing marijuana. And with tomorrow being April 20, or 420 as so many users know it — a day for celebrating weed — it’s never been more apparent that marijuana is shedding its countercultural image and going mainstream. Soon, marijuana opponents will no longer see it as a dangerous drug but as one that, when legalized, has few negative effects on public health and safety and a wide range of benefits. There’s already proof.

A Look At Recreational Pot’s Success

Four states and the District of Columbia have legalized weed so far. Colorado led the charge in 2012, voting in favor of Amendment 64, which required the state to set up legal, regulatory, and tax frameworks for people to cultivate, process, and sell marijuana not only to those who had been getting it for medical purposes for over a decade, but to anyone 21 and older. The state was followed soon after by Washington, and then last November by Oregon, Alaska, and Washington D.C.
While D.C. is experimenting with its own version of legalization, the other states have modeled or will model their own laws around Colorado’s, and for good reason. The law was implemented flawlessly despite Governor John Hickenlooper’s opposition. With the help of a task force consisting of 34 standing members and numerous other members assigned to working groups — from health care and law enforcement to businesses and labor — Hickenlooper ensured that both industry and government would work together to form a sustainable, regulated recreational marijuana industry that everyone could get behind. These efforts came to fruition on Jan. 1, 2014, when Colorado’s first recreational weed dispensaries opened.
Fast forward six months, and the consequences of the law already began to emerge. Despite concerns that increased accessibility would encourage teenagers to light up, Hickenlooper admitted in an interview with Reuters that was simply not the case.  “It seems like the people that were smoking before are mainly the people that are smoking now,” he said. “If that’s the case, what that means is that we’re not going to have more drugged driving, or driving while high. We’re not going to have some of those problems.”
Teen marijuana use has actually been dropping throughout the country, even as more states legalize weed. In Colorado specifically, the percentage of high school students who used marijuana dropped from 39 percent in 2011 to 37 percent in 2013, Forbes reported. Though insignificant on their own, these statistics represent a downward trend that’s persisted despite having medical marijuana available in the state since 2001. And while it’s far more likely recreational pot will be diverted to teens than medical pot, dispensaries are required to sell only to those 21 and up. At the same time, Hickenlooper noted that “one of the reasons so many people voted to legalize it was [that] it’s been pretty easy to get it for decades,” meaning those teens who want it will find a way to get it anyway.
Highway fatalities have been another major concern among opponents, who argue that more people will get into crashes while driving high. Indeed, states that have legalized medical weed have experienced surges in traffic fatalities, including Colorado. But it’s inaccurate to attribute a surge in traffic deaths entirely to marijuana. Unlike alcohol, which remains in the body for only as long as the person’s intoxicated, marijuana can be detected for days or even weeks after it's used. A person who tests positive for marijuana metabolites following a driving death may not have been high when their car crashed.
It’s unclear why these fatalities increased elsewhere, but in Colorado, they quickly dropped to below 2000 levels and have remained there ever since. What’s more, traffic deaths were nearly identical in 2013 and 2014, suggesting legalization had no effect.
Beyond these concerns, recreational weed sales have raked in $53 million in tax revenue, some of which is being allocated to upgrade or rebuild schools. The state’s also saving upwards of $40 million to $60 million in law enforcement costs, as some 10,000 people cited or arrested for possession can carry the drug freely — decriminalization in other states also saves money and reduces unnecessary arrests. None of that money has to go toward fighting an uptick in crime either, because there hasn’t been one. In fact, crime has gone down, with dispensary robberies at their lowest in three years.

© Provided by Medical Daily Kathleen Chippi Veteran pot activist Kathleen Chippi seems an unlikely candidate to have voted no when the state legalized recreational weed in 2012. She says the measure was "fake" legalization because marijuana remains prohibited by federal law, and users, including medicinal pot patients and their caregivers, still risk having their lives ruined by prosecution and jail time. But in what appears to be a largely symbolic move of her own, Chippi is now leading an effort to have Nederland, population about 1,500, declared the world's first "sanctuary" for therapeutic and spiritual consumers of the drug REUTERS/Rick Wilking

It’s Not All Marijuana And Rainbows

It would be nice to say recreational weed has been a complete success, but legalization has stumbled as well. For one, tax revenue in Colorado didn’t meet the projected $70 million because taxes and fees kept some users buying from the black market — similar issues are striking Washington as well. Medical patients who were expected to switch over to recreational (because it involves less hurdles) also stuck with medical due to lower taxes.
The new law has also given people a new reason to visit Colorado if not for the scenic mountain views and snow. But with little knowledge of marijuana edibles, such as brownies, cookies, and gummy candies, some have overdosed. The New York Times’ columnist Maureen Dowd was one of these tourists; after eating an entire candy bar meant to be split into 16 pieces, she experienced intense paranoia, anxiety, and hallucinations — all common symptoms of a marijuana overdose. Another 19-year-old college student visiting the state and trying weed for the first time leapt to his death from his hotel’s fourth-floor balcony after consuming edibles. Other instances in which edibles have been implicated in people’s deaths have occurred, too. And just as concerning, there’s been a rise in pediatric emergency room visits as more children get their hands on these marijuana-infused food products.
Government and industry have already made efforts to curb these incidences, which are relatively few and far between. Starting in February, Colorado’s Marijuana Enforcement Division started incentivizing companies to package their products in doses of 10 milligrams of THC — the active ingredient in marijuana. Packages that contain higher doses are also required to denote how much constitutes a 10-milligram dose, which is recommended, and more explicit warnings and labels will go on the more child-resistant packaging.
“We are concerned about the uneducated consumer who may have had a bad experience with edibles, because that means they may not use our products in the future,” Joe Hodas, chief marketing director for the marijuana product manufacturer Dixie, which is producing a watermelon-flavored drink with 5 milligrams of THC, told the Huffington Post. “So educating that consumer and making sure they know how to use them is of great importance to the rest of the industry.”

Ultimately, it’s going to take a positive image to influence the public and policymakers to back recreational weed. While recreational success in Colorado and the other states will be surely be a factor in this, an even larger factor is medical marijuana.
Going back to that Pew poll, of the 53 percent who favored marijuana legalization, roughly 40 percent said their opinion on it had been different in the past. And when all of them were asked why they supported legal marijuana, 41 percent said it was because of the medicinal benefits while 36 percent said it was no worse than other drugs, with many explicitly mentioning cigarettes and alcohol — both of which are more addictive than marijuana and kill tens of thousands of people each year.
Medical marijuana works. According to a survey from the Public Health Institute, 92 percent of California patients who used medical marijuana agreed that the drug was beneficial, alleviating symptoms associated with serious medical conditions, including chronic pain, arthritis, migraine, and cancer. The researchers wrote the drug was used “equally by many groups of people and is not exclusively used by any one specific group,” meaning that both men and women, young and old, were using it.
Advances in research and approaches to medical marijuana will push its benefits to new heights. Doctors are already recommending medical marijuana patients replace their joints, blunts, and other smoking apparatuses with a high-tech vaporizer, such as the VapeXhale Cloud Evo, which heats the plant just enough to release active chemicals without burning the plant — other forms of smoking that involve burning the plant risk releasing carcinogens as well as causing bronchitis and other respiratory issues.
Recent studies have also supported anecdotalevidence regarding the positive effect of cannabis oil on children with treatment-resistant epilepsy. Cannabis oil is a concentrated extract of marijuana’s active ingredients. Researchers found that children given the extract rich in cannabidiol, a non-psychoactive compound, experienced fewer seizures each month — and none of them got high. Such advances promote marijuana’s use beyond anything recreational and focus on administration of the drug while causing as little harm as possible.
Medical marijuana’s success may be a deciding factor in the way America perceives the drug, but recreational pot will be what brings opponents and proponents together. States where medical marijuana is the status quo can benefit from the transparency provided by legalization. In California, for example, it’s incredibly easy to get a medicinal marijuana card — so much so that San Jose Mayor Sam Liccardo admitted to NBC Bay Area that the system is closer to recreational than medical use. Legalization would ensure both the regulators and regulated have a clear idea of the rules, and could possibly reduce resentment among law enforcement officials and increase perceived legitimacy  among those who see it as a threat to people’s health and safety.
Inciting change takes time, but with determination it can and will happen. It’s already begun. So, while you may be taking a break from the real world tomorrow, get out there on Tuesday and show the world you defy stereotypes and that legal weed can exist in a functional society.
Nhãn: Health-Science