A+ A-
Print Email
About 400 migrants are feared drowned after their boat capsized off Libya, survivors have told Save the Children. 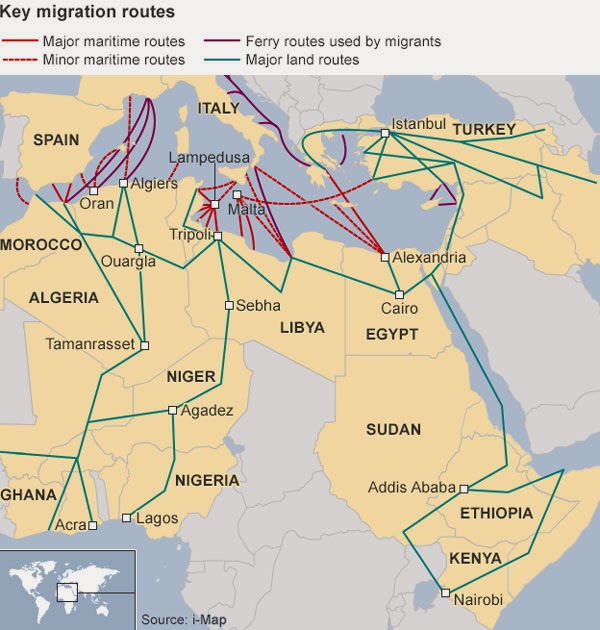 The Italian coast guard had rescued 144 people on Monday and launched an air and sea search operation in hopes of rescuing others.


Save the Children said that many of the survivors were "young men, probably minors".
The European Union says that more than 7,000 migrants have been rescued from the Mediterranean since Friday.
Survivors say that the latest tragedy happened after the boat, carrying about 550 migrants in total, overturned a day after leaving Libya.
Nine bodies have already been recovered, but no more survivors have been found since then.
Michele Prosperi from Save the Children Italy told the BBC it was still trying to find out how many young people were on the boat. "There were a few minors" among the survivors, he said.
The migration season had just started, and "when the weather improves... we may have many more arrivals", he added.
Late last year, the EU scaled back its maritime rescue operations, as some argued the service could encourage more migrants.
However, the latest numbers show that the EU's policy of deterring people is not working, the BBC's James Reynolds in Sicily reports.
Shots fired
Meanwhile the EU's Frontex border agency said that people smugglers had fired shots into the air to warn away another coast guard vessel rescuing migrants.
The incident on Monday happened about 60 nautical miles off Libya after an Italian vessel and an Icelandic coast guard ship came to the rescue of 250 migrants on a tugboat.
After most of the migrants were rescued, traffickers in a speedboat drove towards the rescuers, firing shots before retrieving the now-empty migrant boat.
The coast guard vessel was already carrying 342 migrants from a previous rescue.
Frontex says the incident shows that traffickers are running out of boats.
The EU's commissioner for migration, Dimitris Avramopoulos, told lawmakers: "The unprecedented influx of migrants at our borders, and in particular refugees, is unfortunately the new norm and we will need to adjust our responses accordingly."
Over 280,000 people entered the EU illegally last year, many fleeing conflicts in Syria, Eritrea and Somalia.
An estimated 3,400 migrants died in 2014 trying to reach Europe by sea.
On Friday, humanitarian organisation Medecins Sans Frontieres announced it would operate a search and rescue mission in the Mediterranean between May and October.
Source: BBC
Nhãn: World-Region