In cold blood: Inside the Aaron Hernandez murder trial 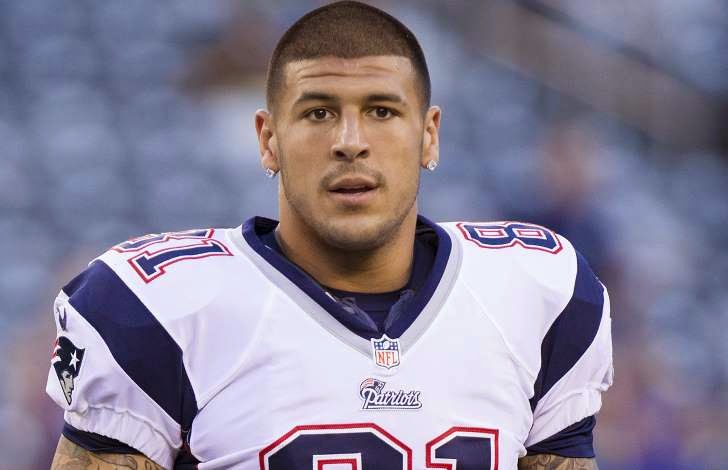 © Chris Szagola/Cal Sport Media/Corbis NFL star Aaron Hernandez has been accused of being involved in the death of Odin Lloyd.
A Newport cigarette burning between his fingers, Tilio DiLoreto, the superintendent overseeing construction in an undeveloped section of the town’s industrial park, looked out on his workers Thursday afternoon. Cranes, bulldozers and dump trucks motored around as he put stakes in the ground by a fence. He wore dark sunglasses, a gold chain and construction boots, and pointed toward mounds of rock and dirt that lined four back lots. He noted a clearing where former Patriot Aaron Hernandez pumped six bullets into Odin Lloyd in 2013. It will soon be paved over as a road into a commercial subdivision featuring four new buildings. He noted that Hernandez’s house stood through the trees. He took a drag.


“Tough winter,” DiLoreto said. “Gotta move dirt.”
Lloyd, a landscaper, knew the job well. He was scheduled to work hours after he was left to die in rural darkness. A local jogger discovered him lying on his back that afternoon, LeBron James sneakers on his feet, a red Red Sox hat five feet from his head. During Hernandez’s 10-week murder trial, first responders detailed the murder scene, testifying about gnats flying in and out of Lloyd’s nostrils as they took note of the area around his bullet-riddled body, his stiff corpse surrounded by scattered fox feces. To preserve the evidence, from tire tracks to shell casings, law enforcement propped up a tent. Wind picked up; temperatures fell. Hard rain came.
“To cover the entire crime scene we would have needed a circus tent,” North Attleborough police detective Joseph Direnzo said.
A double rainbow emerged over the tree line that evening, but Lloyd’s mother, Ursula Ward, didn’t believe the sun shone down on her until Wednesday. She sat in Courtroom 7 at the Fall River Justice Center when Hernandez, standing among his attorneys, listened to the jury forewoman’s guilty verdict. He was told to sit down in a swivel chair so that his hands and ankles could be shackled. Hernandez complied, his harrowing fall complete with him being convicted of first-degree murder, the jurors reasoning “extreme atrocity or cruelty” for a crime that carried mandatory life in prison without parole. Ward trembled when the verdict came. She recalled anger and pain, saying she wanted to join Lloyd in his grave when he was buried.
“My baby — just like God has left his footprint in the sand, my baby’s footprint is in my heart forever,” she said.
Hernandez, linked to the scene by footprints and DNA, was committed to the Massachusetts Correctional Institution in Walpole, Mass., as inmate W106228 for what he did by Corliss Landing. The jury — seven women and five men — agreed with prosecutors that Hernandez, joined by two confederates, killed Lloyd in a brutal manner. The autopsy determined that Lloyd was shot in the back, one bullet recovered by his buttocks. Gunshot wounds were identified in the right abdomen and right forearm. Two .45-caliber bullets penetrated his body by the nipples, one projectile piercing his heart. Three of the shots were fatal. Ward winced at all of it, but lead prosecutor William McCauley circled back to the scene in his closing after defense attorney James Sultan offered that Hernandez witnessed Lloyd’s murder.
“He didn’t know what to do, so he just put one foot in front of the other,” Sultan said.
McCauley, his tone rising from polite to nearly apoplectic when he spoke, countered, pointing at Hernandez repeatedly, referring to him only as “this guy.”
“Ask yourself first of all... what was the purpose in going to, what I’m going to suggest to you is, the most ideal place to commit a murder?” he said. “An industrial park. Nobody is around, it’s almost 3:25 in the morning.”
The jurors noted they were “shocked” Sultan placed his client at the scene. It was one more shot to Hernandez’s credibility. Most of the jurors laughed when asked afterward whether they believed the testimony of Hernandez’s fiancée, Shayanna Jenkins, who allegedly spirited the murder weapon out of their shared house the day after the murder. The jurors also did not assign much value to the PCP testimony introduced by the defense, an attempt to pass blame to Hernandez’s co-defendants, Carlos Ortiz and Ernest Wallace, who drove to his house when beckoned by text message. No defense machinations could put the bullets back in the gun.
“The shots. There were six of them,” said Rosalie Oliver, 56, an accounts payable manager from Rehoboth, Mass. “That’s extreme.”
No matter the motive, Hernandez’s actions reflected a depraved approach. His halcyon days — a Super Bowl touchdown pass from Tom Brady, his name announced in Boston nightclubs (“Aaron Hernandez in the house!”), Patriots employees facilitating his finding a flophouse — grew more distant as the trial trudged along, through blizzards and a bomb threat. Testimony elicited by the prosecutors traced the trajectory of his quick descent, showing him to be an incorrigible cad, chain-smoking marijuana, cheating on his fiancée and questioning whom he could trust. Inebriated and high the night of the murder, clues led right to his mansion’s door.
“The fact that he was a professional athlete meant nothing in the end,” Bristol County District Attorney Thomas Quinn said.
From this point on, hard work will be required for all involved. Ward started the healing process by forgiving Hernandez, but there will be more families seeking justice. The burden of proof shifted to Suffolk County District Attorney Daniel Conley to show jurors Hernandez emptied bullets from a .38-caliber Smith & Wesson revolver into two men when Hernandez stands trial for a 2012 double homicide later this year. Hernandez’s reputation was razed in Fall River, but a new case will have to be built to withstand his defense’s tests once again.
DiLoreto talked about the road ahead, too, targeting his first building’s construction by December. He noted that town officials stopped by once in a while to inquire about permit issues, but his company was cleared by the sheriff’s department to build at the murder scene for a while now. The workers kicked everything into high gear once the snow melted and the trial approached its end. DiLoreto eyed the dirt where Lloyd’s body once laid still.
“Hopefully this will all be gone by winter,” DiLoreto said. “Hopefully.”