A+ A-
Print Email
BOSTON — Now the contours of the Cavaliers’ first postseason after the return of LeBron James have been established. Their run, however long it goes from here, will be anchored by the silhouette of Kevin Love, who is facing a long absence after dislocating his shoulder in a two-man scrum with Celtics big man Kelly Olynyk.
The Cavaliers advanced to the second round easily on Sunday, beating Boston, 101-93, to complete a sweep of their opening series. But they did so mostly without Love, whose injury came just 6:38 into the game. In the locker room after, Love — who came to Cleveland by trade last summer after James had signed to return to the Cavs — was peeved. He had never been in the playoffs before this series started, and had his best showing in Game 3. 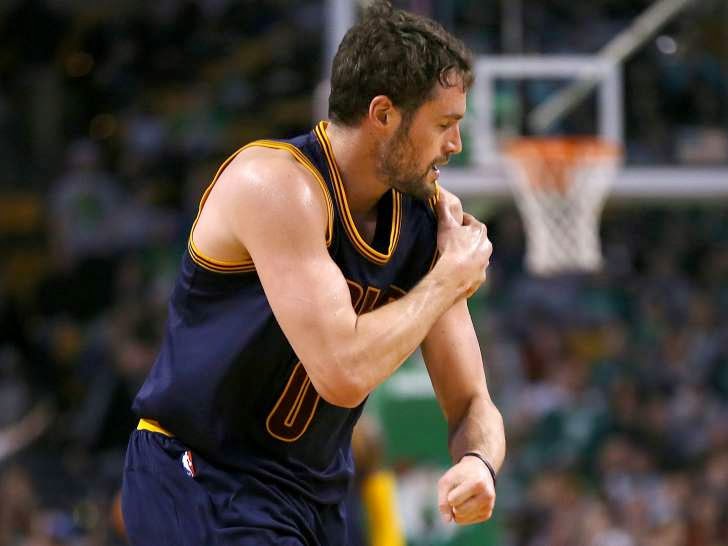 “I just thought it was a bush-league play,” Love said. “I have no doubt in my mind that he did it on purpose.”
That sentiment was echoed elsewhere around the Cavs. Coach David Blatt, treading cautiously, said, “This is a beautiful game and it is a physical game, and you have to expect physicality. But there’s a line and that line shouldn’t be crossed, and that’s what the league is for.”
Olynyk, in time, will take his punishment from the league office, but for Love and the Cavs, that’s little consolation. In the next round, Cleveland will almost certainly take on a Bulls team that itself just got healthy and leads the Bucks 3-1. Though the Hawks are the No. 1 seed, the betting odds have Cleveland as the favorite to win the conference, with Chicago the second choice.
Love said he could imagine himself returning for Game 1 of the second round, but shoulder-dislocation precedence shows otherwise. The injury, even without a muscle tear, typically costs players between five and 30 games, according to NBA injury blog In Street Clothes, which added:

The return to play time following shoulder dislocation appears to be dependent on the amount of damage to the surrounding tissues, particularly the labrum. If the tear is small and the instability is minimal, general rehab can improve the area with a focus on improving the musculature surrounding the joint. Surgery may still be warranted down the road but it can be delayed. Still the associated pain and swelling often requires time to heal. Additionally, even if this ends up being an option for Love, the risk for re-injury would be considerable for the remainder of the postseason. A significant labrum tear would likely require immediate surgery and force Love to miss a substantial amount of time.

Adding to the intrigue is the flagrant 2 foul incurred by starting guard J.R. Smith for a blow delivered to Celtics forward Jae Crowder’s face, which at the very least puts him one more flagrant 2 foul away from an automatic one-game suspension. Or Smith could be suspended for a game by the league.
But it’s the recovery — or not — of Love that will now define the Cavs’ spring. After a difficult time fitting in early in the season, Love seemed to get more comfortable in Cleveland as the season went on. Even as his general scoring production dipped, he was more efficient with his shooting and less exposed defensively after the Cavaliers made roster changes that brought in, most importantly, traditional center Timofey Mozgov.
“If Love is out and if J.R., whatever happens with him, then it’s next man up,” James said. “It’s the next man up. We have guys that have been able to step up. We know it’s going to be a tough void with two of your bigger guys in our lineup and in our season so far, but we got to have guys step up.”

Who those guys will be is a question Blatt will have to wrestle with now. Smith is easy to replace, if necessary. The Cavs have ample perimeter depth — Iman Shumpert, James Jones, Mike Miller — to provide fill-in services.
The frontcourt is another story. Tristan Thompson is the natural replacement for Love, but he has been very effective in a reserve role, and Blatt might be loath to tinker with that aspect of the rotation. But the options are limited behind Thompson — the Cavaliers have a pair of dilapidated centers, Kendrick Perkins and Brendan Haywood, but that’s it.
Veteran forward Shawn Marion can play the position, but he has fallen out of the rotation altogether. James, too, will get some time at power forward in small lineups.
Blatt knows that how he configures his lineups from here, without Love, will be the subject of constant scrutiny. But he was at least taking this afternoon to not worry about it, to bask in his first postseason series win as an NBA coach.
“Overall, I thought we did a pretty good job,” he said. “Participated in our first playoff as a team. … We played a very good team and we swept the series, so we must have done some good things, and we did show poise, and we did show fortitude to win the series.”
Nhãn: Sport