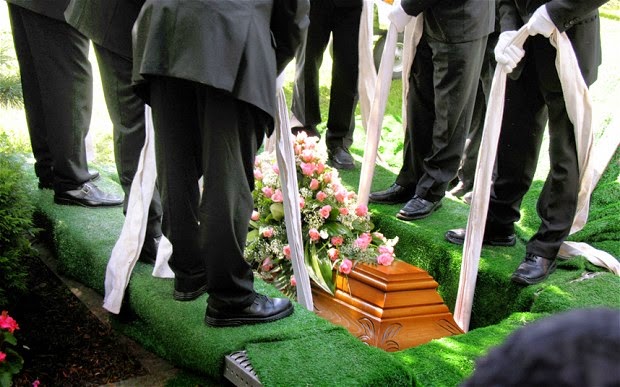 A COUNTY Laois woman has hilariously beaten her husband to the punch this week after being laid to rest in a cemetery plot he had bought for himself in 1996, before they were even married.
Janet Ganley, who died of a massive stroke on Sunday evening, had the final laugh this morning as she was being lowered into the grounds of their local church.


“She was always stealing my chair in the sitting room,” explained husband Sean Ganley after the service. “I was forever asking her if she’d take my grave as quick. Then this happens. Well, I nearly died with laughter myself when I found her in a heap on the kitchen floor. Not a peep out of her – the feckin’ chancer!”
Ms. Ganley was later pronounced dead by a local paramedic Steven Taylor, who arrived on the scene some time later.
“It was gas out. The husband was in tears laughing at the whole thing,” recalled Taylor, who admitted the situation seemed a little weird at first. “Then he told me about how she was always robbing his seat, and the whole robbing his grave jibe. It must have taken us an hour to strap her into the gurney with the laughing.
“Best call out I’ve been on in a long time.”
The plot, which Mr. Ganley bought nearly twenty years ago, was originally just intended for himself as he was not in a relationship at the time.
“The fact she had actually robbed my grave as quick has gotten me over the whole thing,” he concluded. “But that was classic Janet – always beating me to it the gas bitch!”
Nhãn: Lifestyle