A+ A-
Print Email
Fighting between Yemen's warring factions raged in southern and central parts of the country and air strikes hit Houthi militia forces in Aden on Friday, but there were no fresh moves toward dialogue. 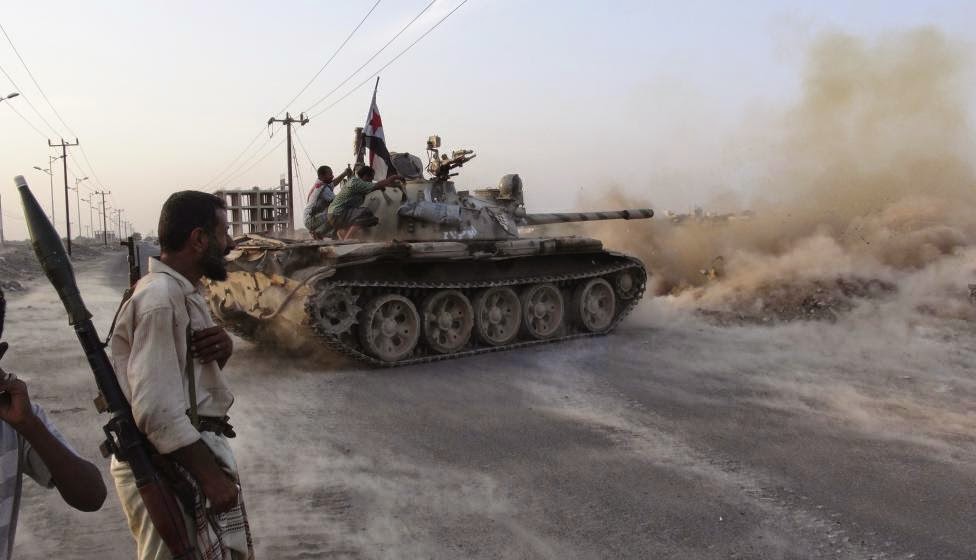 Members of the Southern Resistance Committees man a tank during clashes with Houthi fighters in Yemen's southern city of Aden April 23, 2015.

Saudi Arabia says it is winding down its month-old bombing operation against the Iran-allied Houthis and forces loyal to Yemen's former president. But Riyadh pounded targets with at least 20 airstrikes across Yemen on Thursday and 10 more on Friday.
The civilian death toll from the fighting and airstrikes since the bombing started on March 26 has reached an estimated 551 people, the United Nations said on Friday. Its children's agency UNICEF said at least 115 children were among the dead.


Washington and other Western countries backing the Saudi-led aerial campaign have grown increasingly worried about the humanitarian crisis on the ground and also about the risk of Sunni Muslim jihadist groups taking advantage of the chaos.
Islamic State, which has had little presence in Yemen, released late on Thursday a video it said showed members of the group in the country conducting military exercises and pledging to attack the Houthis, who are from the Zaydi Shi'ite sect.
Saudi Arabia has called a meeting with major U.N. aid agencies and others to discuss improving aid deliveries to Yemen, which have been hindered by the naval blockade, Saudi officials and U.N. sources said.
Violent clashes continued between the Houthis and local militias near the Khor Maksar district of Aden on Friday, residents said, as well as in Taiz and al-Dhala.
Heavy fighting in Marib province east of the Yemeni capital Sanaa killed 15 people, tribal sources there said, as the Houthi militia and forces loyal to former president Ali Abdullah Saleh tried to advance into the rugged Sirwah district.
Air strikes
Renewed airstrikes, days after Riyadh announced the end of its main bombing campaign, hit the 35th Brigade in Taiz, a Yemen army unit loyal to Saleh whose troops have clashed this week with militiamen supporting President Abd-Rabbu Mansour Hadi.
Four weeks of air raids have had limited impact on the lightly armed and mobile Houthi guerrilla fighters, but have significantly degraded army units loyal to Saleh, Western diplomats say.
Splitting the alliance between the Houthis and Saleh is seen as pivotal to any chance of success for the Saudi-led coalition in its goal of pushing the militia back towards its northern heartland, resuming peace talks and restoring Hadi to Sanaa.
Several army units have announced in recent days that they were pledging their loyalty to Hadi after fighting alongside Saleh or sitting on the sidelines. But those switches do not yet appear to have swung the balance of fighting on the ground.
Separately, a spokesman for Defence Minister Mahmoud al-Subaihi rejected on Friday as untrue local media reports that the Houthis had released him after weeks of detention.