A+ A-
Print Email
THE Nation’s Dads have again been warned against the wearing of ill-fitting shorts ahead of the soon to arrive summer weather.
The weather, expected any time between now and the end of September, often see the prevalence of men of a certain age packing their trouser monkeys into their only pair of shorts with devastating consequences. 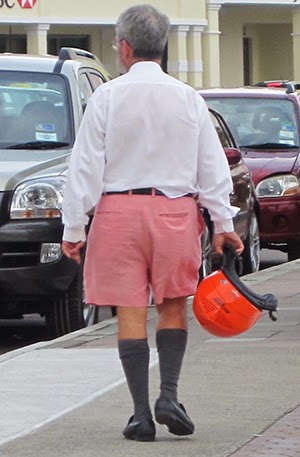 “We’re looking at 90% presence of moose knuckle, the male equivalent of camel toe,” explained fashion expert and concerned citizen Zoe Richards, “often Dads will have invested in a pair ‘good shorts’ something in the late 80s and nearly 90s, deeming them far too expensive an item to simply throw out”.
“And since the Irish warm weather is so fleeting, Dads see no reason to spend yet more money on the purchase of a second pair of shorts in 30 years. But, with their waistlines understandably growing over time and repeat washing of the shorts causing shrinkage, we’re left with the crotch’s equivalent of trying to jam an airplane into an envelope”.
Despite careful and subtle suggestions by wives around the country, fathers have traditionally ignored new shorts advice, preferring instead to take one deep breath and stuff themselves into their existing shorts.
“The knock on effect of a father’s stubbornness can appear harmless, but many peoples’ days are ruined when out of nowhere catch sight of a great big moose knuckle,” explained Richards.
New measures are being introduced by embarrassed children who in the coming months will take the unprecedented step of spending money of their fathers out of the kindness of their own hearts.
“It’s a great initiative,” Richards enthused, “purchasing a brand new pair of shorts for the Nation’s Dads will go a long way to solving this problem”.
Despite everyone’s best intention, it is expected that upon receipt of their new shorts the Nation’s Dads will simply pull a face and say ‘thanks but I like the way my old ones fit’.
Nhãn: Lifestyle