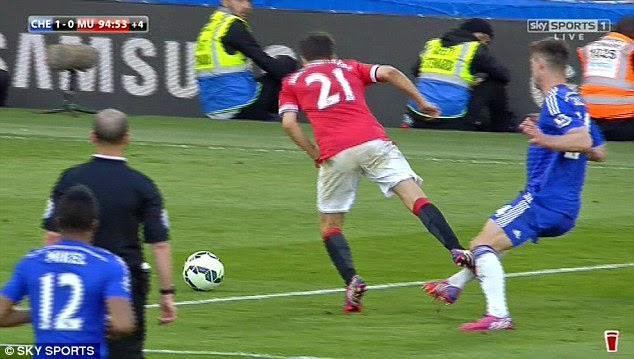 FOLLOWING Manchester United player Ander Herrera’s failed attempt at getting a last minute penalty against Chelsea on Saturday, the Premier League has announced a new initiative which will see money invested in grassroots diving coaching.
“The Premier League is the best league in the world despite this not exactly being true, is absolutely 100% is, so in an effort to stay competitive with other European leagues we have established a tactical diving taskforce which will see the world’s best current and ex-divers sharing their knowledge with the top division’s elite,” Premier League head honcho Richard Scudamore told WWN.


Premier League top brass felt the need to act following what could be described as a world class dive by Herrera failing to con referee Mike Dean with the official instead choosing to give the player a yellow card. Some of the money from new TV deals which total £5 billion will go towards funding the much-needed initiative.
The diving initiative will be headed up by Tom Daley, Didier Drogba and Jurgen Klinsmann, who will juggle his new duties along with his USA head coach position.
“There are still a handful of English players who are years behind in terms of their diving technique and this is the type of player our new diving coaching will target,” Scudamore added.
The new initiative will be rolled out at the same time next season as a referee crackdown on diving, and general foul play. The referees’ initiative will last several weeks before being slowly forgotten about, paving the way for the new diving techniques to flourish.
“Dishonesty is the key as well as what could be classed as downright stupidity,” explained Daley as he outlined some of the coaching involved, “if say, you have a defender who is racing back to clear a ball off his goal line, but he feels a fresh gust of wind brazenly attack the back of his neck, he should throw himself to the ground in mock agony. The referee wouldn’t believe for a second a professional footballer would dive instead of stopping a guaranteed goal.”
“These are fine margins, but in time the average football fan won’t see it as diving, but more as part and parcel of this wonderful game,” Daley added.
Nhãn: Sport