A+ A-
Print Email
NEW YORK -- Alex Rodriguez admitted he noticed the crowd anticipating his 660th home run in his final three at-bats.
He will soon find out how the New York Yankees plan on acknowledging his next home run.
Rodriguez moved to within one of tying Hall of Famer Willie Mays for fourth place on the all-time list with a two-out solo home run in the bottom of the first inning and then reached base three times Sunday night as the Yankees defeated the New York Mets, 6-4.

"I've said it a lot, Willie's my father's favorite player," Rodriguez said. "I just remember hearing about Willie and Mickey Mantle all the time. He's one of my heroes. I'm excited about the win today, the home run. I'm having fun."
Rodriguez moved to within one of Mays when he hit a 2-2 curveball from Mets left-hander Jon Niese (2-1) off the top of the right-center-field wall for his fifth home run of the season.
In his first chance at tying Mays, Rodriguez doubled to left but was not credited with an RBI since a throwing error by left fielder Michael Cuddyer allowed a run to score during the Yankees four-run second. 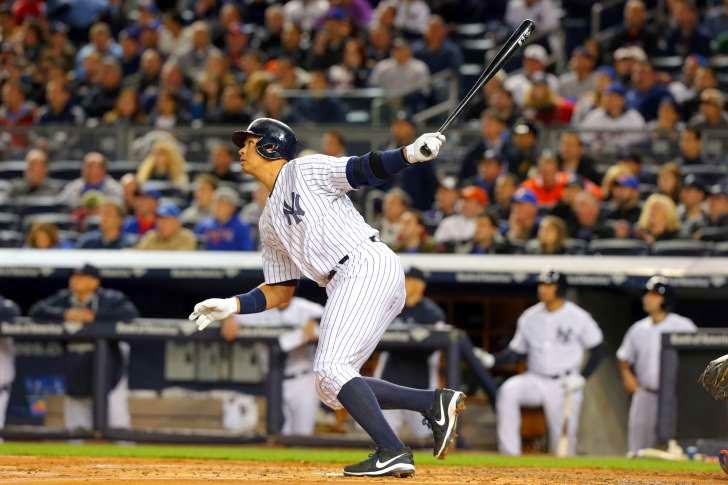 © Brad Penner-USA TODAY Yankees designated hitter Alex Rodriguez hits a solo home run against the Mets during the first inning at Yankee Stadium.
"Another big night," Yankees manager Joe Girardi said. "I thought the home run was important in the first inning and then the double (was big) as well. He sparked our offense."
In his second chance at 660, Rodriguez reached on a throwing error by Mets shortstop Wilmer Flores in the fifth that allowed left fielder Brett Gardner to score New York's final run. In his final chance, Rodriguez flied out to left field in the seventh.
"Yeah there's no question about it," Rodriguez said of the fan reaction. "I just felt a lot of energy in the building and it was fun. To feel that energy was pretty cool."
Rodriguez's next chance at tying Mays will be Monday against Tampa Bay and whenever it happens, it will trigger a $6 million clause in his contract that the Yankees are unlikely to pay due to his history with performance-enhancing drugs.
"It's pretty amazing when you think about it, 660 home runs, that's a lot of home runs," Girardi said. "Obviously you hope it comes tomorrow and you hope there's a couple of guys on when he hits it. That's what you hope for but he's been a big part of our offense this first month and we need it to continue."
That wasn't a topic after the Yankees won for the eighth time in 10 games by also getting RBI doubles from second baseman Gregorio Petit and Gardner as well as a run-scoring single by center fielder Chris Young in the second.
"I am sure Alex realizes the errors he's made but he's a great player, a great player," Mets manager Terry Collins said. "I know he's (almost) 40 years old now but he got himself in great shape and he's still dangerous."
Before Rodriguez's home run, the Mets took a 2-0 lead on right fielder Curtis Granderson's first home run of the season and second baseman Daniel Murphy's run-scoring double off Yankees right-hander Nathan Eovaldi.
After the Yankees scored four in the second, the Mets got two back in the third on doubles by Cuddyer and Murphy.
Rodriguez's night took some of the focus off pitching for both teams as neither starter pitched well.
Eovaldi left with a 5-4 lead but allowed four runs and seven hits in 4 1/3 innings. Since official scoring rules dictate a starting pitcher must complete five innings for a win, Chasen Shreve (1-0) was awarded the win.
Dellin Betances pitched a scoreless eighth and Andrew Miller recorded his seventh save.
Niese allowed six runs (four runs) and eight hits in five innings. The Mets were charged with four errors.
"There are going to be nights (like this)," Collins said. "In a game like this you can't make those mistakes. It's just a bad night for us."
NOTES: The Yankees announced they will employ a six-man rotation this week, which means RHP Masahiro Tanaka will start Wednesday and not Tuesday. They intend on promoting RHP Chase Whitley to make the start Tuesday. ... Mets 3B David Wright is expected to begin baseball activities consisting of fielding ground balls and jogging this week. He may return toward the end of this week from a strained right hamstring that he injured on April 15. ... Yankees CF Jacoby Ellsbury missed the game with soreness in his hip that prompted him to leave Saturday's loss in the eighth inning. The Yankees do not believe the injury is serious. ... The Mets signed veteran INF Brooks Conrad to a minor league contract and assigned him to Triple-A Las Vegas.
Nhãn: Sport