A+ A-
Print Email
ALMOST the entire nation of Ireland has confirmed that rugby is in fact ‘great now’ following the triumphs of both the Irish men’s and women’s rugby teams in their respective 6 Nations tournaments.
Rugby was also ‘great’ this time last year after a triumphant 6 Nations campaign by the men’s team, with rugby then shortly returning to a general state of ‘meh-ness’ in the eyes of the Irish sporting public as at club level the Irish provinces failed to truly excel in European club competitions. 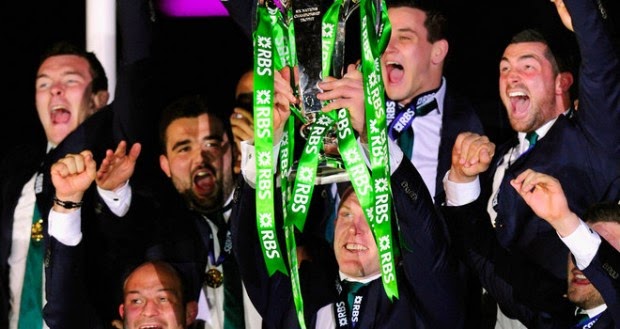 A & E departments dealt with a record number of heart attacks on Saturday evening as the exhilarating final games came to a close, while many other fans took the time to fabricate and perfect their ‘I was there’ stories despite not being in Edinburgh for the celebrations.
The truly awe-inspiring rise of Irish rugby in the last 15 years has secured the conditional, unconditional support from much of the die-hard bandwagon jumping supporters who remain incredibly passionate about the Irish rugby team as long as it is winning.
Many Irish rugby fans have maintained a love and passion for the game for much of their lives, while the larger sporting public admitted that rugby is currently ‘great’ but could be relegated to ‘not great’ if the team fails to beat New Zealand by 60 points in this year’s World Cup final.
Irish rugby hopes to benefit from the many proud Irish people caught up in the wave of exuberance that comes with winning games, but some in the IRFU is sceptical of such benefits.
“We’re not even sure if beating New Zealand by 60 points will be enough for some sunshine fans,” an IRFU spokesman told WWN, “right now everyone is over the moon, but if we win by 60 points with the kick and chase tactics we’ll probably be told we’re being too boring”.
Some experts, however suggest that rugby’s rise will continue its ascent if the record number of ‘man tears’ shed by fans up and down the country this weekend is anything to go by.
Nhãn: Sport