A+ A-
Print Email
South Korea will mark the first anniversary of the Sewol ferry disaster Thursday, with nationwide memorial services by private organizations and local governments as well as family members of the victims and survivors. 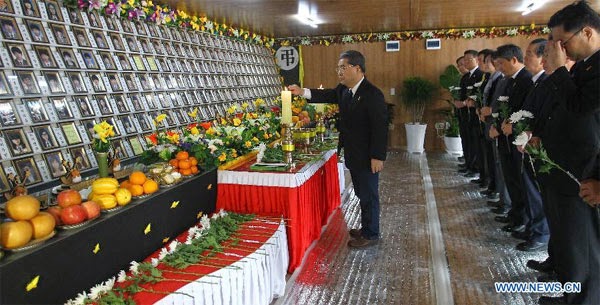 On April 16, 2014, the 6,825-ton ferry Sewol capsized and sank off Jindo Island in the country's southwest, leaving 295 dead and nine still missing. Among 476 passengers aboard the ill-fated vessel were 325 students of Danwon High School on a school trip to Jeju Island. Only 75 students survived.
Around 300 private organizations and local governments will hold memorial ceremonies during the day to mourn for the deceased students and other victims.
Family members of the victims and survivors have a plan to hold their own memorial services at about 2 p.m. at a group memorial altar in Ansan City, Gyeonggi Province, where the students came from.
But, the ceremony is highly likely to be delayed as the chair who represents the family members said Tuesday that they will put off their own ceremony indefinitely unless the government accepts their demands.
The committee for families of the April 16 ferry disaster has demanded the scrapping of the enforcement decree for a special committee to investigate the incident, announced on March 27 by the government.
The family members said the decree will hinder the fact-finding as it undermines independence of the committee. The executive order also restricted the scope of investigation to the analyzing and reviewing of the results of the government's investigation.
Moon Jae-in, chief of the main opposition New Politics Alliance for Democracy, visited the group memorial altar at 8:30 a.m. along with other lawmakers, condoling with the bereaved families.
Prime Minister Lee Wan-koo visited the memorial altar, but he was blocked by the family members from entering the memorial altar as Lee refrained from giving a clear answer to calls for the scrapping of the decree.
On the eve of the tragedy's first anniversary, a semi-official memorial service was held at the Pengmok Harbor of Jindo Island. Yoo Seung-min, floor leader of the ruling Saenuri Party, failed to join the ceremony as some family members of the victims strongly blocked his participation.