A+ A-
Print Email
The United States has asked for access to Philippine military bases in eight locations to rotate troops, aircraft, and ships as Washington shifts its forces to Asia and as China expands its military presence in the South China Sea. 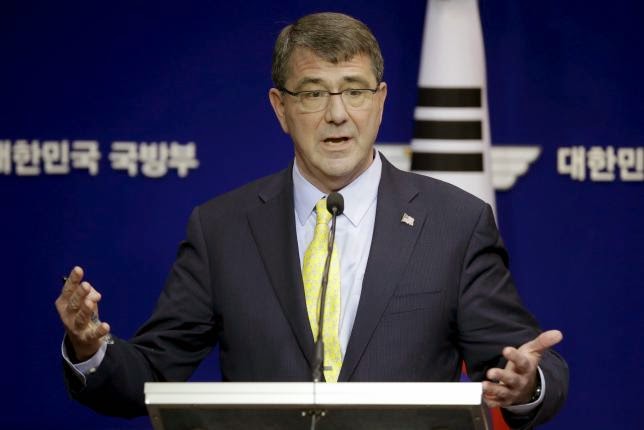 U.S. Defense Secretary Ash Carter, in a speech in Arizona, has outlined Washington's next phase in its Asia "pivot", deploying its most sophisticated destroyers, bombers and fighters to the region.
The Asia "pivot" has already seen U.S. Marines rotating through the Australian tropical city of Darwin, the country's closest city to Asia, for training.


At least eight locations in the Philippines have been identified as possible sites where U.S. troops, planes and ships will be rotated through a series of military training and exercises, Philippine General Gregorio Catapang, military chief, told local television network ABS-CBN.
But, the Americans will have to wait until after the Philippine's Supreme Court makes its rulings on the constitutionality of the military deal, called Enhanced Defense Cooperation Agreement, signed last year between Manila and Washington. It may decide later this year.
"If we formalize (now) and they start putting up structures and it’s not constitutional, they will have to destroy those structures," Catapang said late on Friday, adding the list was finalised in October during a Mutual Defence Board meeting.
Four of the locations are on the main island of Luzon, where U.S. and Filipino soldiers usually hold exercises, two on the central Cebu island, and two more on the western island of Palawan, near the disputed Spratly.
China claims most of the potentially energy-rich South China Sea, disputed in parts with the Philippines, Vietnam, Malaysia, Brunei and Taiwan, and denies accusations its actions in its own territory are provocative.
Recent satellite images suggest China has made rapid progress in building an airstrip suitable for military use in contested territory in the Spratly islands, which drew concern from the United States and its allies in Asia.
"Once the U.S. rebalance to Asia policy is in full swing, the Philippines expect the Americans to seek more access to military bases on Mindanao island and civilian airstrips on Luzon," said a senior air force official familiar with the arrangements.
"The Americans are interested in Laoag airport and Batanes island, both in the northern part of Luzon," he said, adding U.S. planes had landed on Batanes during the war in Iraq and Afghanistan in the early 2000s.
The United States is also interested to return to its two former military bases in Subic and Clark, which they left in 1992 after the Philippines terminated basing agreement.