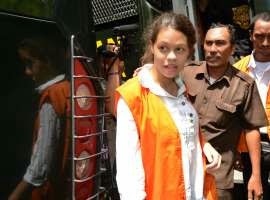 
A US couple were given long jail terms Tuesday for the "sadistic" murder of the woman's mother, whose body was found stuffed in a suitcase outside a luxury hotel on Indonesia's Bali island.
Tommy Schaefer, 21, was found guilty of the premeditated murder of Sheila von Wiese Mack on the resort island and jailed for 18 years.


His girlfriend and the victim's daughter, 19-year-old Heather Mack who was pregnant at the time of the crime, was found guilty of assisting in the murder and given a 10-year prison term.
Schaefer wept in the Bali court as judges recounted harrowing details of the case, in which he beat the 62-year-old victim to death with a fruit bowl during a blazing row in the five-star resort, before he and his girlfriend dumped the body in a taxi.
"The defendant's actions disturbed the public and can be considered sadistic," said Judge Made Suweda as he sentenced Schaefer. The case sent shockwaves across the tropical holiday island that welcomes millions of foreign visitors each year.

© Fournis par AFP Tommy Schaefer (C) waits inside a holding cell at a court in Denpasar, on Indonesia's Bali island, on March 31, 2015
Schaefer's jail term was the same as that recommended by prosecutors. He escaped a death sentence, the maximum term for premeditated murder in Indonesia.
Heather Mack, who hid in the bathroom while Schaefer attacked her mother, was found guilty of the lesser charge of assisting in the murder. Prosecutors had recommended a 15-year jail term but Suweda said judges decided to give her a lighter sentence as she needed to care for her baby daughter, who was born last month.
- Bali shocked -
Von Wiese Mack's badly beaten body was discovered in a taxi outside an upmarket resort on Bali last August. After her killing, the couple -- from the Chicago area -- fled to another part of Bali where police arrested them.
Schaefer confessed to the killing during his trial but claimed he was defending himself during an argument with von Wiese Mack, who was unhappy that her daughter was pregnant.
Prosecutors alleged that Schaefer "blindly hit" von Wiese Mack with the fruit bowl in a fit of rage after she directed a racial slur at him. Schaefer is black.
While her mother was being murdered, Mack hid in the bathroom and the couple then stuffed the body into the suitcase together, according to her indictment.
The pair were tried separately.
Handing down the verdict in Schaefer's case, Suweda said he was "legally and convincingly" guilty of premeditated murder.
Mack's baby girl Stella is staying with her in Bali's notorious Kerobokan jail, where prisoners live in cramped, insanitary conditions and drug abuse is widespread.
In an interview with the Chicago Tribune newspaper in February, Mack said she was "petrified" and revealed that she was sharing a cell with 10 other women.
"I loved my mom with all my heart and miss her every day," she said.
The case involved a lengthy investigation, with assistance from the US Federal Bureau of Investigation.
Locals and foreigners alike were horrified at the rare murder on Bali, a pocket of Hinduism in Muslim-majority Indonesia famed for its palm-fringed, pristine beaches.
Foreign visitors sometimes run into trouble on the tropical island, although they normally fall foul of Indonesia's tough anti-drugs laws, which include the death penalty for smuggling narcotics.
Nhãn: World-Region