A+ A-
Print Email
Vietnam plans to develop 20 power plants that will operate on rice husks.

Construction of the first thermal rice husk-run power plant has started on a 9-hectare land plot in Long My District of the southern province of Hau Giang. The project is estimated to cost $31 million.

The development of the project shows that Vietnam has paid higher attention to the development of clean energy from agricultural waste products such as rice husks, sawdust and bagasse (also known as biomass fuel). 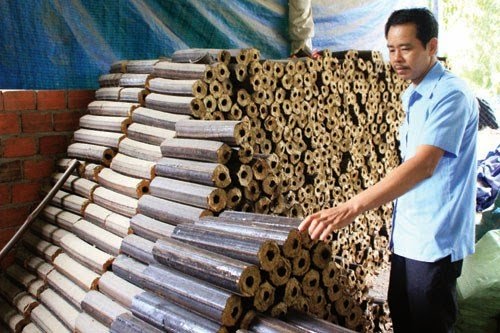 This will play an important role in Vietnam’s power development strategy in the future, because Vietnam, as an agricultural economy, puts out a big volume of agricultural waste products every year. If it can take full advantage of the waste products, it will be able to spend less money on fossil fuel and therefore ensure the national power security.
Energy from rice husks
The thermal power plant is one of 20 rice husk-run power plants to be built nationwide. In Mekong River Delta, called Vietnam’s “rice granary”, such plants would be built in five provinces of An Giang, Kien Giang, Hau Giang, Dong Thap and Can Tho with the total capacity of 200 MW.
It is expected that 200 tons of rice husk will be consumed a day. The waste to be generated by the plants will be used to make high-quality cement and electrically insulated materials.
Scientists have every reason to build rice-husk power plants in Mekong River Delta. The largest rice cultivation area churns out 5 million tons of rice husks every year. At present, rice husks go to the environment, canals and rivers, thus causing pollution.
However, once the thermal power plants become operational, the rice husks will be collected for fuel at the power plants, which will help save money, generate more power for the national grid and create more jobs for locals.
In fact, several thermal power plants using agricultural waste products have been built, including the Lam Son 12.5 MW power plant utilizing the waste from the sugar refinery process.
However, scientists affirmed that the thermal power plant in Hau Giang province is the largest one so far.
Rice husks, bagasse and sawdust all can be used as an alternative fuel for fossil fuel in industrial production. As for industrial boilers, the use of sawdust instead of coal would help save 50 percent of the production cost. Meanwhile, the figure could be up to 70 percent if using sawdust instead of FO.
A report of HAWA, the HCM City wooden fine arts enterprises, showed that Vietnam would be able to cut 1,000 liters of FO of imports for every 2.5 tons of sawdust it uses as fuel.