A+ A-
Print Email
The 14th Shangri-La Dialogue ended in Singapore on May 31 with a message that dialogue is needed to build trust and transparency. 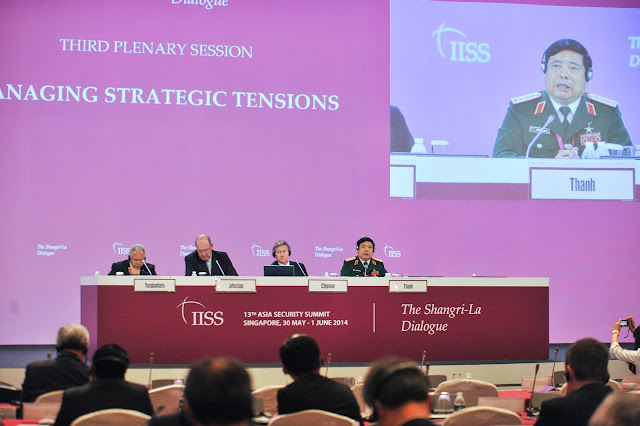 The 14th Shangri-La Dialogue ended in Singapore on May 31 with a message that dialogue is needed to build trust and transparency.

German Defence Minister Ursula von der Layen said this is the first time German has joined the dialogue, which gives the country an opportunity to exchange experience and learn from other countries.

She highlighted that transparency and trust building is key to cooperation, adding that together with security structure and mutual benefit they are the pillars for successful partnership.

Sharing Layenâ€™s opinion, New Zealand Defence Minister Gerry Brownlee said his country attaches much importance to the maintenance of peace, stability and prosperity in the region. Therefore, New Zealand wishes to engage more closely in regional security structure through bilateral and multilateral dialogues at all levels, he said.

He also expressed concern on tension-causing acts on the East Sea, stressing that his country is willing to join hands in seeking ways to settle disputes in the sea.

The East Sea is one of the busiest maritime and aviation routes in the world, he noted, adding that one half of New Zealand trade volume is transported through the sea. He emphasised the significance of enhancing transparency in the context of intensifying military actions in the region. He added that all countries should abide by international law.

Meanwhile, in his speech, Deputy Chief of the General Staff of China's People's Liberation Army, Sun Jianguo, said principles of the UN Charter must be observed, which is the only way to develop peacefully, adding that win-win cooperation should be the final goal towards peace and stability.

He claimed that China has always been a friend and a trustful partner of other countries. According to him, the East Sea situation currently remains peaceful and stable.

At the same time, Defence Minister of the host country Ng Eng Hen, said Asia is proving its role as the speediest developing region in the world in terms of trade, finance and defence.

However, the region is facing a number of urgent challenges, including extremist terrorism, trans-border human trafficking and cyber security, he noted.

The Singaporean minister pointed to the need for all regional countries to build high consensus, avoiding conflict and seeking common solutions in line with maintaining peace and security stability in the region.

He also called for all parties to exercise restraint and not to conduct actions accelerating tension both at sea and in the sky.

Speaking to a Vietnam News Agency correspondent after the dialogue, John Chipman, Director of the International Institute for Strategic Studies, said this yearâ€™s event saw considerable straightforward speeches by defence chiefs, many of which mentioned the East Sea issue as well as the urgent need for the early conclusion and signing of a Code of Conduct in the East Sea between ASEAN and China.

The defence ministers expressed the necessity to make more efforts to find measures to build trust with each other as well as with the rest of the world, he held.

Running from May 29-31, the 14th Shangri-La Dialogue gathered nearly 500 delegates from 38 countries, territories and international organisations. Throughout the past 14 years, the event has become a venue for participants to talk and share experience, working together to seek ways to maintain peace, stability and security in the region for common prosperity.-VNA