A+ A-
Print Email
US-led strikes targeting the Islamic State group killed at least 52 civilians in northern Syria, a monitor said Saturday, but the Pentagon said it could not confirm the report. 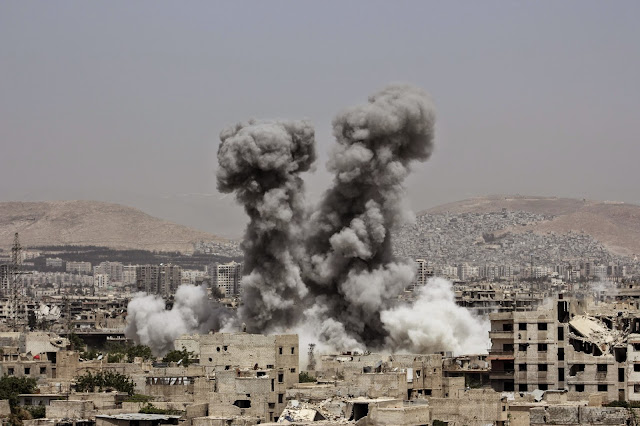 The Syrian Observatory for Human Rights monitor also reported deadly violence elsewhere in Syria, including a rebel rocket attack Saturday that killed 15 civilians and wounded dozens in Aleppo.
Observatory director Rami Abdel Rahman told AFP that US-led coalition strikes early Friday on the village of Birmahle in Aleppo province killed 52 civilians.
He said seven children were among the dead but that the toll could rise as rescuers were battling to save 13 people trapped under rubble.
Kurdish militiamen and Syrian rebel fighters were clashing with IS jihadists in a town roughly two kilometres (one mile) away from Birmahle at the time of the strikes.
"Not a single IS fighter" was killed in the strikes on Birmahle, said Abdel Rahman, adding that the village is inhabited by civilians only with no IS presence.
US Central Command spokesman Colonel Patrick Ryder told AFP there was "no information to corroborate allegations that coalition air strikes resulted in civilian casualties".
"Regardless, we take all allegations seriously and will look into them further," he added.
Rocket fire hits Aleppo
News of the deaths come as Canadian Prime Minister Stephen Harper visited Iraq, days after lawmakers in Ottawa voted to expand their country's contribution to the US-led coalition against IS.
Air strikes by the international coalition have supported Kurdish militias fighting IS in Aleppo province, most notably in the flashpoint border town of Kobane, which is near Birmahle.
Backed by the strikes, Kurdish fighters drove jihadists out of Kobane in January.
A statement released on Friday by the coalition's joint task force said it had conducted six air strikes near Kobane on IS tactical units.
Prior to Friday's strikes, the coalition's raids had killed 66 civilians since it began attacking IS positions in Syria in September 2014.
According to the Britain-based Observatory, the air campaign has killed more than 2,000 people in total, including at least 1,922 IS fighters.
The rocket attack in Aleppo struck a regime-controlled neighborhood killing 15 civilians, including nine children and a woman, most of them from the same family, said the Observatory.
"The attack was carried out by a rebel group to avenge the death of its leader Badr Khaled Siraj, who is better known as Khaled Hayyani," said Abdel Rahman.
He said Hayyani was killed Friday night by pro-regime snipers and described him as a "dangerous man who was responsible for over 550 deaths, including 130 children, in 2014".
Dozens were seriously wounded, added Abdel Rahman who expected the death toll to rise.
Syrian state television blamed "terrorists" for the rocket attacks, which it said killed 12 people and wounded 45.
'Chlorine' attack
Also on Saturday, at least 40 civilians, including children, suffered respiratory problems in "chlorine gas attacks" on two rebel-held villages in northwestern Idlib province, the Observatory said.
The monitor said regime forces dropped barrel bombs filled with chlorine -- a toxic agent that can be considered a chemical weapon -- on Saraqeb and Nairab, causing the deaths.
A video posted online by activists which could not be verified by AFP showed paramedics splashing a toddler with water, while other children, some coughing, breathed through gas masks.
The Observatory, which relies on a network of sources inside Syria, said a baby had died in Nairab.
Activists have accused the Syrian regime of using chlorine on civilian areas in the past.
In January, the Organisation for the Prohibition of Chemical Weapons said chlorine gas had been used in attacks on three Syrian villages in 2014.
In eastern Syria on Saturday, 16 civilians were killed when regime aircraft pounded the city of Deir Ezzor and a nearby IS-held village, the monitor said.
Nhãn: World-Region