A+ A-
Print Email
Afghan security forces are suffering record casualties in their first battles against the Taliban since the U.S. combat mission in Afghanistan ended in December after more than 13 years. 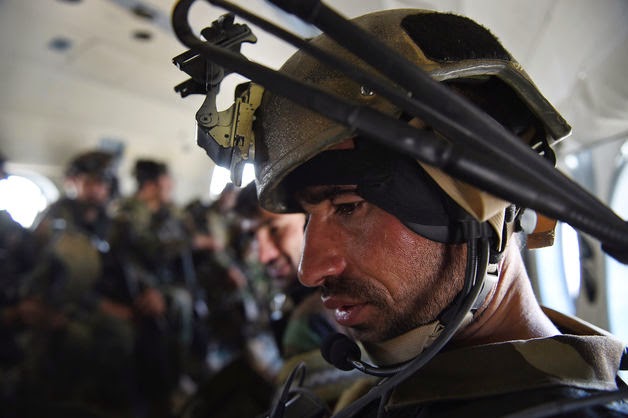 Afghan troops sit inside a helicopter in Kunduz, Afghanistan, on April 30.

The number of killed and wounded so far this year is about 70 percent higher than during the same period last year, said Colonel Brian Tribus, director of public affairs for NATO’s Afghanistan mission.
Last year’s casualty rates, which marked a fifth consecutive annual increase, were labeled in November as “not sustainable” by a top U.S. general. With Afghan forces now operating without the same U.S. and NATO support that they previously enjoyed, the body count has soared.
“We are taking so many casualties, that’s the reality,” said Afghan Interior Minister Nur al-haq Ulumi. “We are fighting by ourselves.”
Some 4,950 Afghan army and police personnel were killed or wounded in the first 15 weeks of 2015, against 2,900 during the same period a year ago, said a coalition military officer not authorized to speak publicly about the losses.
U.S. officials say that so far, Afghan army and police enlistments are holding up. But the Afghan units’ performance raises questions about their ability to hold off the Taliban if President Barack Obama moves ahead with plans to further shrink the U.S. role there.
Disclosure of the increasing casualty rates comes as the Taliban steps up attacks in the country’s north, sensing an opportunity in the U.S.-led coalition’s pullback.
Village defenses
Obama plans to shrink the U.S. force by the end of 2016 to around 1,500 soldiers, largely focused on guarding the U.S. embassy. The U.S. has spent more than $60 billion since 2002 to train and equip the Afghan army and police.
The Afghan Local Police, a village-defense force funded by the U.S., is taking especially heavy losses, said General John Campbell, who commands U.S. and NATO forces in Afghanistan.
“They’re not using them the way they should,” Campbell told visiting reporters on Saturday. “The Taliban sees them as easy prey.”
The local police are supposed to protect Afghan settlements, especially in rural areas, from insurgent attacks. Yet, the ALP establishes checkpoints as far as 10 kilometers (6.2 miles) away from villages and lacks needed equipment including radios, body armor and helmets.
Taliban ambushes
Campbell said he had been surprised recently to discover a Ministry of Defense warehouse bulging with “thousands and thousands” of bulletproof vests and headgear even as the local police units go without protection. The Afghan defense ministry now plans to transfer the equipment to the Ministry of Interior, which commands the local police units, he said.
Ulumi said that local police have borne the brunt of the fresh Taliban offensive, which has targeted the northern provinces of Kunduz and Badakhshan. And he acknowledged “some weaknesses in discipline” had allowed Taliban fighters to ambush government forces.
“Our national police and the Afghan Local Police are the first line of defense,” Ulumi said. “They are always fighting the insurgents. That’s why we have so many casualties.”
The higher casualty rate also reflects the loss of U.S. helicopters that evacuated wounded Afghans from the battlefield. The small Afghan Air Force now is responsible for that mission.
Most of the Afghan local police killed or wounded this year have been victims of improvised explosive devices (IEDs), according to Ulumi. Insurgents have shifted from employing suicide bombers to using IEDs, which for years were the defining weapon of the anti-U.S. insurgency in Iraq.
Fewer checkpoints
A Taliban fighter on average is killed every 48 hours attempting to plant a bomb, according to Sediq Sediqqi, a ministry spokesman. Afghan officials are considering shifting to fewer checkpoints with larger numbers of police at each, he added.
The police units, though, are often outgunned by the Taliban, whose Pulemyot Kalashnikova machine guns are effective at longer ranges than the AK-47s carried by police, according to Defense Department reports.
Despite the soaring body count, Afghan morale remains high, said Ulumi, a former general in the Afghan army. Afghanistan’s nearly unbroken 40-year history of conflict has tempered its people: “They were born in war, grew up in war and know very well what war is about,” he said.
Fresh offensives
Afghan forces have initiated offensives in at least three areas since assuming full control of combat operations and have performed well, said Tribus.
For all of 2014, at least 5,400 Afghan police and army were killed in action, a 6.5 percent increase from the previous year, according to a March report from the Institute for the Study of War in Washington, D.C.
“They do need to decrease their casualty rate,” Lt. General Joseph Anderson, then commander of the International Security Assistance Force joint command in Afghanistan, said in November. “Those numbers are not sustainable in the long term.
Meanwhile, coalition forces are having a harder time obtaining a clear picture of the battlefield. With just 9,800 U.S. soldiers -- down from a peak of 140,000 -- Campbell has fewer personnel in the field to provide reports of enemy operations. ‘‘As you get smaller, you’re more vulnerable,’’ he said.
Resources eroded
Since the start of 2014, Campbell has lost 53 percent of his airborne intelligence, surveillance and reconnaissance (ISR) systems.
Campbell said he had convinced U.S. Central Command to defer plans to strip him of some intelligence-gathering systems including MC-12 aircraft. The prop-driven Air Force planes are capable of gathering real-time full-motion video and signals intelligence.
Even as the U.S. tries to stretch its remaining ISR assets to cover a complex battle, coalition forces are left increasingly dependent for information upon Afghan government sources.