A+ A-
Print Email
ESTEEMED Hollywood actor Al Pacino has signed on to a new movie by director Barry Levinson called ‘Softly, Softly, Shouty, Shouty’ about a shy yet bombastic resident in a retirement home who finds love.
Harking back to his Oscar-winning performance in Scent Of A Woman, Pacino returns to being a romantic lead with the film expected to be out later this year. 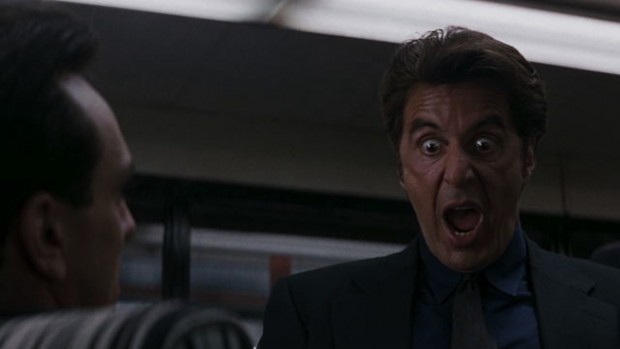 Starring opposite his Godfather co-star Diane Keaton, Pacino is expected to stretch himself with much of his dialogue starting off quite neutral in tone, but exploding into loud shouting out of nowhere, and for no apparent reason.
“I have to say I’m happy with the film,” Pacino told WWN in a quiet tone, forcing us to lean closer to make out what he was saying, “really happy!” Pacino added now screaming loudly, rupturing the eardrum of a man sitting on a bench 12 miles away.
Pacino has refused to discuss his Oscar chances for 2016 but that hasn’t stopped the film’s director fuelling the fire.
“Al’s been great, and he really brings the dialogue alive,” Barry Levinson told WWN, “you have this ebb and flow that really highlights when Al is being quiet, soft-spoken and then when he scorching his vocal chords to indicate he is enthusiastic or angry about something”.
Cinemas have been reluctant to show Pacino’s movies in recent years as movie goers have suffered a number of heart attacks, brought on by the fright caused by Pacino starting to yell at the top of his lungs of out nowhere.
Nhãn: Entertainment