A+ A-
Print Email
PASSENGERS on this morning’s 7:15 Ryanair flight from Dublin to Newcastle were treated to a special bonus this as the returning members of a raucous hen party had ‘one last session’ on their way home.
The hen party, celebrating the upcoming wedding of a woman known only by the name ‘Sexy Shauna’, got stuck into the drinks trolley as much as they could muster during the 85 minute flight, in a bid to stay drunk after a weekend-long session in Dublin. 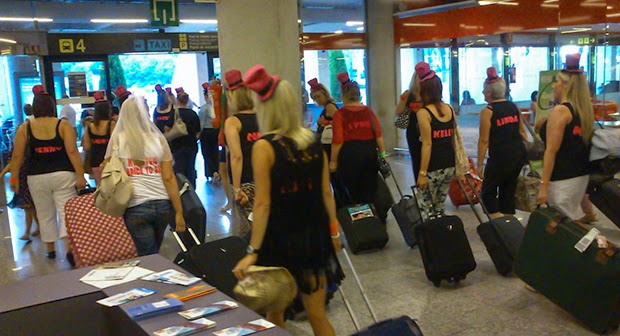 During their visit, ‘Sexy Shauna’, identifiable by her T-shirt which read ‘Sexy Shauna’s Dublin Session’, was joined by her best friends ‘Mental Margaret’, ‘Delicious Diane’, ‘Lucious Linda’, and ‘Pauline’, described by the hen party as “a bit of a dry shite”.
Commuters on the tiny aircraft got to sample a taste of the great fun enjoyed by the waiting staff in the Thunder Road Cafe during this morning’s flight, as the girls, described by themselves as “legends”, yelled obscenities at the cabin crew while waving sex toys around.
“Boy, those girls, they sure are fun,” said Ian Hennigan, a 32-year-old businessman whose company won’t pay for Aer Lingus flights.
“I’ve never seen a group of women drink so many cans of Captain Morgans & Coke in such a short period of time. And the way they kept yelling ‘showwus yer cock’ at me, well, that really made my day”.
The accommodation of the rowdy hen party on the flight was criticised by some passengers, but staff at the low-cost airline made assurances that everything was in accordance with their ‘one threatening, rowdy group of passengers per flight’ policy.
Nhãn: Lifestyle