Armour: One Mayweather-Pacquiao bout was enough, we don't need another

A+ A-
Print Email
Once was more than enough.
Floyd Mayweather and Manny Pacquiao ran the perfect scam, fleecing fans $100 for the privilege of watching what was panned almost universally as a glorified sparring session. Fight of the Century? More like Farce of the Century.
But like every good swindler, Mayweather seems to think if a con was good once, it'll be even better the second time around. How else to explain the report Tuesday that he's "willing" to fight Pacquiao again next year, when Pacquiao's torn-up shoulder has healed.
How big of him.
There's no response yet from the Pacquiao camp, but it's safe to say he's not going to turn down another boatload of cash. That he already appeared to have lost a step before his shoulder turned to hamburger meat hardly matters. 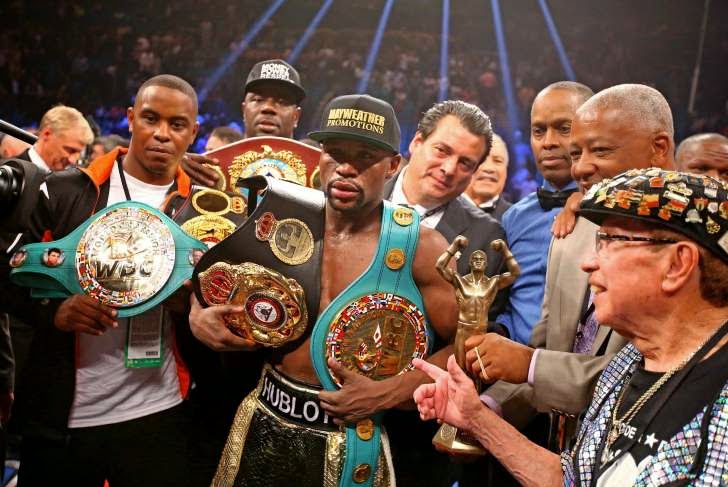 The worst part is that for all the fury there was over Mayweather's unanimous decision Saturday night, boxing fans, big-event enthusiasts and rubberneckers will probably let themselves get suckered again if there's a rematch.
Even after all the griping about the snoozefest — Mayweather is as clinical as a surgeon in the ring, but his defensive game plan is as bland as it is effective — the announcement that Pacquiao fought with a torn rotator cuff will convince some to give them a second chance. Shell out even more for the pay per view the second time around, too.
They are, after all, the two best pound-for-pound boxers of their generation, and any other fight pales in comparison. You can hear the rationalizing now: If not for Pacquiao's bum shoulder, the much-anticipated matchup would have lived up to its hype.
"Manny should be commended for going through the fight because I certainly wouldn't have done it if I was the boxer," Pacquiao's adviser, Michael Koncz, told USA TODAY Sports on Monday.
But no matter how you try and spin it, this fight occurred five years too late. By the time a rematch would happen, the only bout worth watching between these two would have to be in shuffleboard. Or canasta.

© Mark J. Rebilas-USA TODAY Sports Mark J. Rebilas-USA TODAY Sports Pacquiao, 36, appeared to be past his prime even before he climbed into the ring with Mayweather as his other interests — he's a congressman in his native Philippines — took precious time away from his training. Of his five other career losses, two came in the last three years.
Mayweather is still in fearsome shape at 38, but he's grown cautious. The entertaining, go-for-broke style of his younger days has been replaced with a strategy designed to ensure victory. He picks his punches carefully, and uses spectacular footwork to prevent opponents from landing repeated blows that would give them momentum.
He, too, has other interests. After floating the possibility of retirement for months, Mayweather set a date Saturday night for his going-away party. There would be one more fight, in September, and then he's done.
Really done. Not like those other two times he retired, only to unretire.
"I've just lost the love of the sport," Mayweather said. "My love and my passion for boxing is not the same, like it once was."
When it comes to Money, though, everything is negotiable. What he says — and does — is subject to his interpretation, liable to be revised at any time. Or in the case of his domestic abuse history, blatantly rewritten.
Sure enough, Mayweather's $100 million check from the Pacquiao bout had barely cleared the bank when ESPN's Stephen A. Smith claimed he'd gotten a text from the boxer saying he'd be interested in a rematch when Pacquiao's shoulder is healed.
But sequels are never as good as the original. Given what a bust the first Mayweather-Pacquiao bout was, even the makers of New Coke would consider this a bad idea.
Mayweather-Pacquiao would have been a great fight once upon a time. The idea that it still could be is nothing more than a fairy tale.
Nhãn: Sport