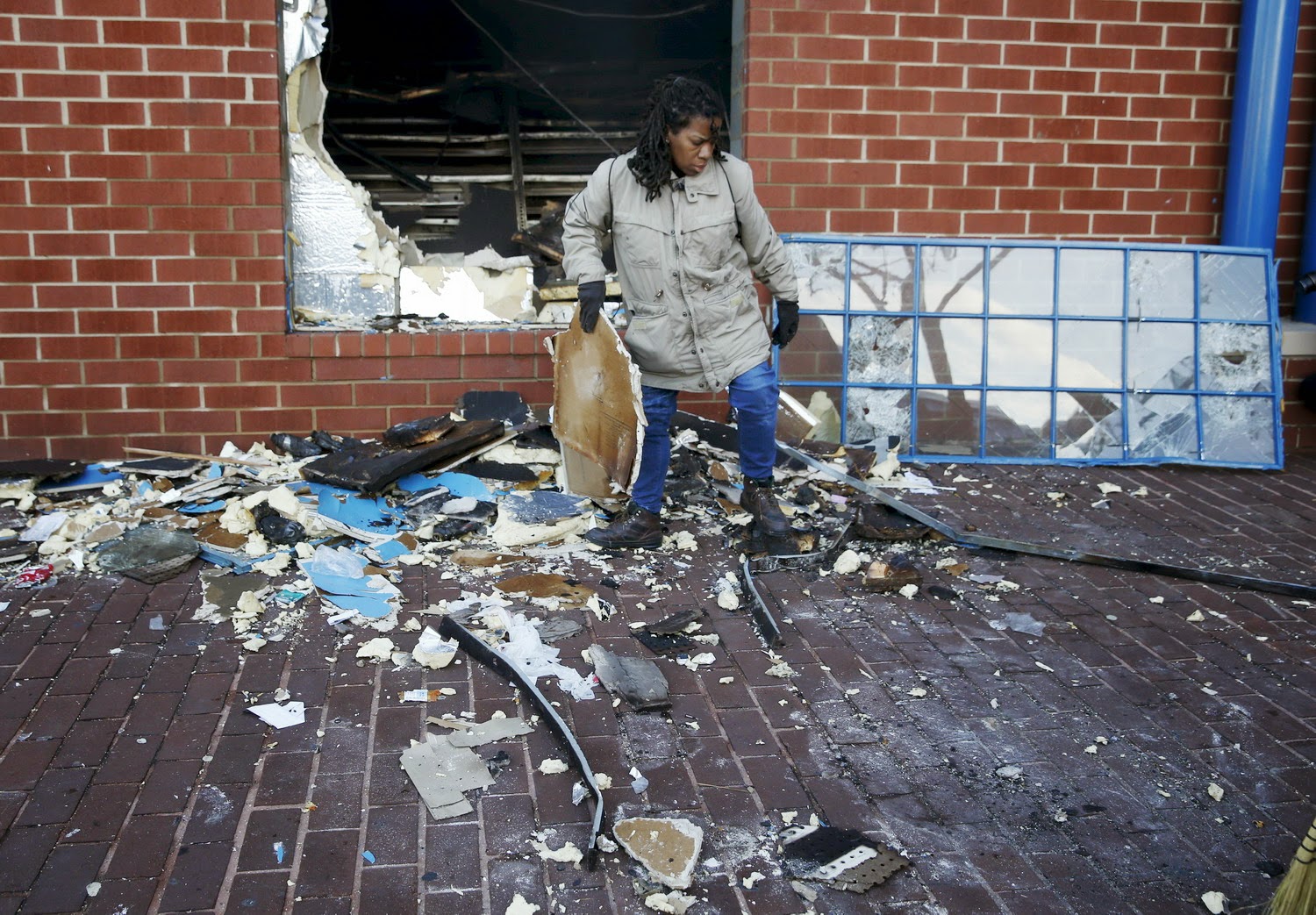 A woman cleans up a CVS store that was looted and set on fire during clashes with police on Monday in Baltimore, Maryland April 28, 2015. Photo: Reuters/ Shannon Stapleton

Acrid smoke hung over streets where fire crews raced to contain damage from violence that broke out just blocks from the funeral of Freddie Gray and spread through much of West Baltimore.
The unrest - which saw looters ransack stores, pharmacies and a shopping mall and clash with police in riot gear - was the most violent in the United States since Ferguson, Missouri, was torn by gunshots and arson late last year.


Police said 15 officers were injured, six seriously, on Monday.
Gray's death gave new energy to the public outcry over police treatment of African Americans that flared last year after police killings of unarmed black men in Ferguson, New York City and elsewhere.
The violence appeared to catch city officials and community leaders somewhat off-guard after a week of mostly peaceful protests following Gray's death on April 19.
Maryland Governor Larry Hogan, a Republican, declared a state of emergency on Monday and the National Guard was arriving in the city. A one-week curfew was also imposed in the largely black city starting Tuesday night, with exceptions for work and medical emergencies.
Answering criticism of not responding quickly enough to Monday's events, Mayor Rawlings-Blake told CNN: "This was an incident that sparked this afternoon ... I think it would have been inappropriate to bring in the National Guard when we had it under control."
Blake said on Twitter on Tuesday that was beginning her day with a survey of the most damaged areas.
On Monday, youths threw rocks and bricks at police. Rioters smashed car windows outside a major hotel and twice slashed a fire hose while firefighters fought a blaze at a CVS pharmacy that had been looted before it was set on fire.

Firefighters on Monday evening battled a blaze that consumed a church's senior center under construction in East Baltimore. City officials said it was not known if the fire was connected to the unrest.
Police made at least 27 arrests and Baltimore schools were closed on Tuesday. An Orioles baseball game was canceled and businesses and train stations shut down in the city of 620,000 people 40 miles (64 km) from the nation's capital.
Caught off-guard
Gray was arrested on April 12 when running from officers. He was transported to the police station in a van, with no seat restraint and suffered the spinal injury that led to his death a week later. A lawyer for Gray's family says his spine was 80 percent severed at the neck while in custody.
Six officers have been suspended, and the U.S. Justice Department is investigating for possible civil rights violations.
Much of Monday's rioting occurred in a neighborhood where more than a third of families live in poverty.
After the looting began, pastors and other local figures took to the streets to try to prevent violent clashes between black youth and police and Gray's family renewed their pleas for peaceful demonstrations.
Deadly confrontations between mostly white police and black men, and the subsequent unrest, will be among the challenges facing U.S. Attorney General Loretta Lynch, who was sworn in on Monday and condemned the "senseless acts of violence."
Riots over police brutality and race issues have gripped U.S. cities before.
In the 1992 Los Angeles riots, more than 50 people were killed in violence set off by the acquittal of four police officers who beat black motorist Rodney King. In 1968, dozens died in riots, including several in Baltimore, after the assassination of civil rights leader Martin Luther King Jr.