A+ A-
Print Email
Thousands have lined the streets of Memphis, Tennessee to pay tribute to blues artist BB King, who died earlier this month. 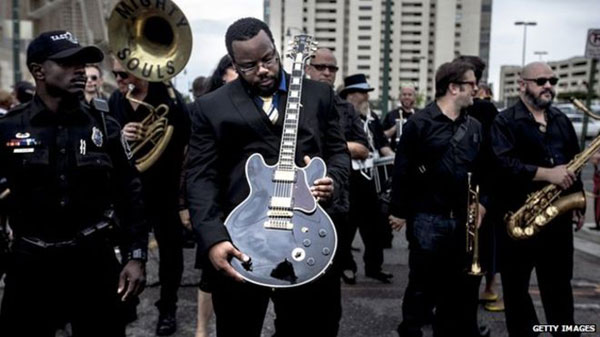 'Lucille', one of BB King's beloved guitars, was carried before his hearse

At an event on Wednesday, a Dixieland jazz band walked ahead of a black hearse down Beale Street - a street synonymous with American blues music.
It is where the young King was nicknamed the Beale Street Blues Boy - a moniker later shortened to BB.
King died on 14 May. US authorities are investigating claims he was poisoned.
His daughters have alleged the musician was given "foreign substances to induce his premature death" by his business manager Laverne Toney and personal assistant Myron Johnson.
Lawyers for King's estate have said the claims are unfounded and disrespectful.


The coroner initially said he had died of a series of small strokes connected to his Type 2 diabetes, although a further autopsy has now been carried out, with results expected in eight weeks.
At the street procession honouring King's memory, the Memphis-based Mighty Souls Brass Band played the song When the Saints Go Marching In.
Drummer Rodd Bland - the son of the late blues singer Bobby 'Blue' Bland - carried one of King's signature Lucille guitars.
Artists including singer Ruby Wilson, Bobby Rush and the Ghost Town Blues Band all performed tributes on stage. "Such a beautiful day," Memphis native Gary Daly told the Associated Press. "It's a great tribute to a wonderful contributor to the world of music.
"It's been really amazing to see the people of Memphis coming out, having a great time together, celebrating a wonderful, loving man."
King's body is being taken to Indianola, Mississippi, which King considered his hometown, for his funeral on Saturday.
Source: BBC
Nhãn: World-Region