A+ A-
Print Email
From across the pond, President Barack Obama has warmly welcomed David Cameron's election victory, but with Britain's role in Europe and the world in doubt so too is its "special relationship" with the United States. 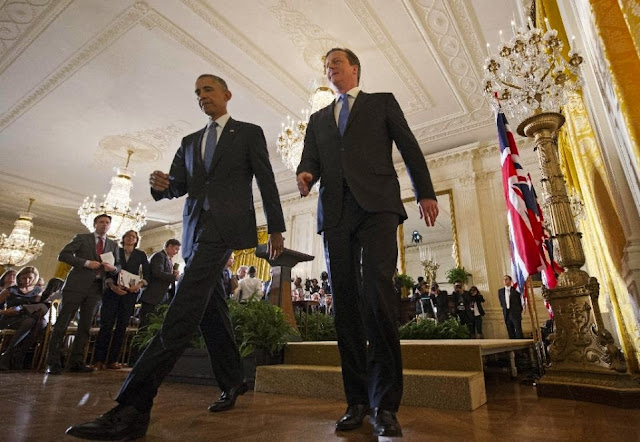 US President Barack Obama(L) and Britain's Prime Minister David Cameron make their way off the stage at the end of a press conference in the East Room of the White House on January 16, 2015 in Washington, DC


White House congratulations are rarely more effusive.
Lauding Cameron's "impressive electoral victory," Obama praised the "special and essential relationship" between the United States and Britain.
"I have enjoyed working closely with Prime Minister Cameron on a range of shared interests these last several years, and I look forward to continuing to strengthen the bonds between our countries."
With a mere five years separating them and a language in common, officials say Obama and his "bro" Cameron get on very well -- something of a rarity for a US president regarded by many foreign officials as businesslike if not bordering on frosty.
Britain's role as a permanent member of the United Nation's Security Council, a NATO member that fought in Iraq and Afghanistan and a participant in nuclear talks with Iran make coordination vital.
The White House may more often than not make Germany's Angela Merkel the first European on Obama's call sheet, but the special relationship continues to have very practical advantages.
In Washington, British diplomats have frequent bilateral meetings with senior White House National Security staff that are not afforded to other European allies.
But beyond talk of shared values, Winston Churchill and bonds forged in the fires of World War II, there is a sense in Washington that Britain is adrift.
"Washington is skeptical of Cameron," said Thomas Wright of the Brookings Institution. "He doesn't seem very interested in foreign policy."
Nowhere is that more evident than in Cameron's policy towards Europe.
In the run up to the election he promised a referendum on European Union membership in 2017.
Cameron, his Conservative party and all major political parties will campaign for a "yes" to stay in the EU, but for many in Washington it is mind-boggling that the prime minister would even take such a referendum risk.
A Britain that is inside the world's largest trading bloc, is much more useful than an isolated island in the north Atlantic.
"Americans are frustrated because they want a strong Britain and a strong Europe," said Wright.
"If he continues as before, Britain's influence in the US will decline further. But, if he changes course and tries to restore British influence internationally, he could breathe new life into the special relationship."
Post-election choices
But Cameron's first moves after the election auger continuity rather than change.
The reappointment of Foreign Secretary Philip Hammond has already raised eyebrows.
"It suggests that Cameron is pretty satisfied with the way foreign policy is going, there is no sense that he feels that they need to up their game," said Gary Schmitt of the American Enterprise Institute.
Cameron's reelection also heralds a continuation of austerity policies, designed to rein in government spending.
The prime minister announced Friday that "Mr Austerity" George Osborne would remain finance minister in his new Conservative administration.
While the US Treasury and Federal Reserve might welcome that fiscal prudence, it means Britain is unlikely to heed American calls to increase defense spending.
As a NATO member, 10 Downing Street is committed to spending at least two percent of GDP on defense.
Osborne's last budget meant the figure is now more like 1.8 percent, according to influential London think tank RUSI.
Thursday's election will also raise concerns at the Pentagon about Britain's commitment to nuclear deterrence.
Nationalists in Scotland opposed to hosting nuclear-armed submarines on their turf ran the board, picking up 56 of 59 seats.
While they won't be in government, they will be a powerful voice advocating a military draw down that would only increase British reliance on the United States.
"Common history and a shared tongue count for a lot," said James Lindsay in a blog post for the Council on Foreign Relations, "but on an increasing number of issues, London and Washington will be happier talking about the past than the future.