Cambodia looks for a bountiful harvest

A+ A-
Print Email
Thousands of local people gathered to attend the Cambodian Royal Ploughing ceremony, presided over by King Norodom Shihamoni on May 6 in Battambang province, to wish for abundant harvests. 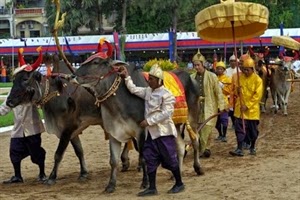 Thousands of local people gathered to attend the Cambodian Royal Ploughing ceremony, presided over by King Norodom Shihamoni on May 6 in Battambang province, to wish for abundant harvests.

The ancient royal rite, which marks the traditional beginning of the rice growing season, began with solemn processions of earth and water followed by a symbolic ploughing of a portion of the field with rice seeds scattered into the newly ploughed furrow.

After that, a pair of royal oxen was led to seven dishes of rice, corn, beans, sesame, grass, water, liquor and water. Based on what the oxen eat, court astrologers make predictions of the weather, epidemics and yields of the new growing season.

During this yearâ€™s ritual, the oxen ate beans and corn, representing good expectations for a bountiful harvest of those grains this year.

Later, King Norodom Sihamoni, accompanied by other guests, visited the exhibition on the provinceâ€™s agricultural achievements and products.

Located 300 kilometres away from the capital city of Phnom Penh, northwest Battamband province is regarded as the granary of Cambodia.

The agriculture sector of the country has grown 3-4 percent annually over the past few years, generating around one third of the Gross Domestic Product (GDP).

Cambodia produced 9.32 tonnes of paddy rice in 2014, 4.7 tonnes of which (or around 3 million tonnes of rice) were exported.-VNA