A+ A-
Print Email
Charlie Hebdo cartoonist "Luz", who designed the front page of the magazine that appeared after the Paris attacks, has said he will no longer draw the Prophet Muhammad.
Renald Luzier has told French magazine Inrocks that drawing Muhammad "no longer interests me".
Twelve people were murdered when two Islamist gunmen burst into the Charlie Hebdo offices on 7 January.
The attack prompted a wave of sympathy under the banner "Je suis Charlie".
Within days of the attack, the satirical magazine's surviving staff produced a defiant edition with the headline "All is forgiven" above Luz's cartoon showing the Prophet weeping, while holding a sign saying "I am Charlie". 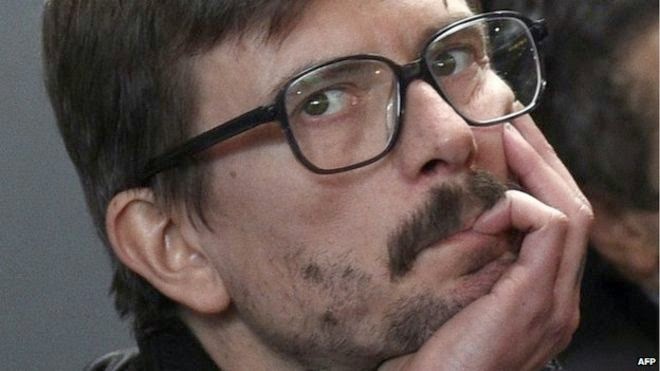 Pictorial depictions of Muhammad are considered forbidden by most Muslims.
Following the January attack, the magazine's normal print run of 60,000 eventually climbed to eight million.
"I've got tired of [drawing Muhammad], just like I got tired of drawing Sarkozy. I'm not going to spend my life drawing them," Luz said in answer to a question about the famous January edition.
Luz is about to release a book of cartoons entitled "Catharsis", which he says in his interview was his way of expressing himself after the murder of his colleagues.

Stephane Charbonnier - "Charb"
Jean Cabut - "Cabu"
Bernard Verlhac - "Tignous"
Georges Wolinski - "Wolin"
Philippe Honore
Obituaries: The 17 who lost their lives in three days of Paris attacks
The satirical weekly has courted controversy in the past with its irreverent take on news and current affairs. It was firebombed in November 2011 a day after it carried a caricature of the Prophet Muhammad.
The magazine, which was regularly struggling to make ends meet, is now backed up by tens of millions of euros of funding.
But Luz says that financial security has posed questions about its future editorial direction.
"Is Charlie still a political paper? Can it become a news mag?" he asks. A new format is set to appear in September, he says, but little more is known.
In February, former Charlie Hebdo editor Philippe Val said he feared for the magazine's survival amid a new media climate of self-censorship.
In his Inrocks interview, Luz reacts furiously to the remarks: "He isn't Charlie any more. He's just a part of Charlie's history."
"The terrorists did not win," he insists.
Nhãn: Entertainment