A+ A-
Print Email
The ability of adult stem cells to renew themselves decline as we age, but researchers have discovered a small molecular drug that could ‘rejuvenate’ brain and muscle tissue. The study, published in the journal Oncotarget, successfully interrupted the activity of a growth factor in mice that has been previously shown to affect a stem cell’s ability to regenerate. 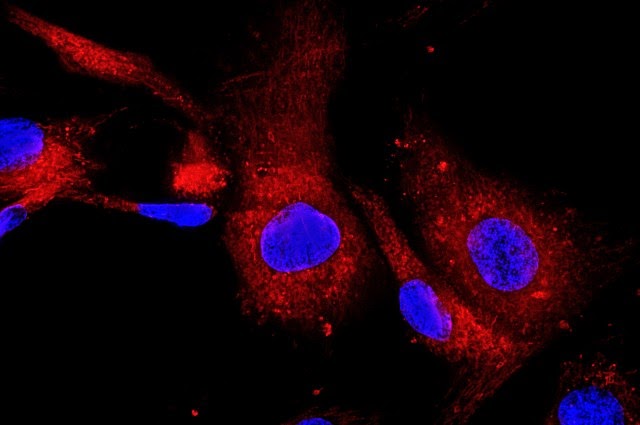 Previous research has shown that molecular changes in a stem cell microenvironment contributes to the tissues’ ability to repair damage and maintain homeostasis. Researchers found the transforming growth factor beta 1 (TGF-beta1) pathway to play a significant role in the aging of multiple stem cells. In the new study, researchers reduced TGF-beta1 activity by inserting genetic blockers into the brains of old mice. The results found tissue regeneration of stem cells to be ‘enhanced’ in old mice.
"Based on our earlier papers, the TGF-beta1 pathway seemed to be one of the main culprits in multi-tissue aging," said co-author David Schaffer, director of the Berkeley Stem Cell Center and a professor of chemical and biomolecular engineering, in a statement. "That one protein, when upregulated, ages multiple stem cells in distinct organs, such as the brain, pancreas, heart and muscle. This is really the first demonstration that we can find a drug that makes the key TGF-beta1 pathway, which is elevated by aging, behave younger, thereby rejuvenating multiple organ systems."
The research team injected a small molecule called Alk5 kinase inhibitor, which is known to reduce the influence of TGF-beta1, into the blood of old mice once a day for 11 days. Researchers found the small molecule had ‘perked up’ the stem cells' ability to regenerate both brain and muscle tissue in old mice.
Researchers hope this research could result in effective treatments for combating multiple age-related degenerative disorders, which can have a range of debilitating effects
"The challenge ahead is to carefully retune the various signaling pathways in the stem cell environment, using a small number of chemicals, so that we end up recalibrating the environment to be youth-like," Conboy said. "Dosage is going to be the key to rejuvenating the stem cell environment."
Nhãn: Health-Science