A+ A-
Print Email
By Vincent Frank
Now that we have reached the quarter point of the 2015 MLB season, there are a lot of things we can take away from the action that has already happened around the diamond.
Perennial last place teams are in contention for a playoff spot, while a few pitchers have exceeded any previously set expectations. Meanwhile, a certain third baseman in Kansas City is finally living up to the hype at the plate.
Let’s check in on the eight biggest surprises of the young season thus far.
1. Houston Astros 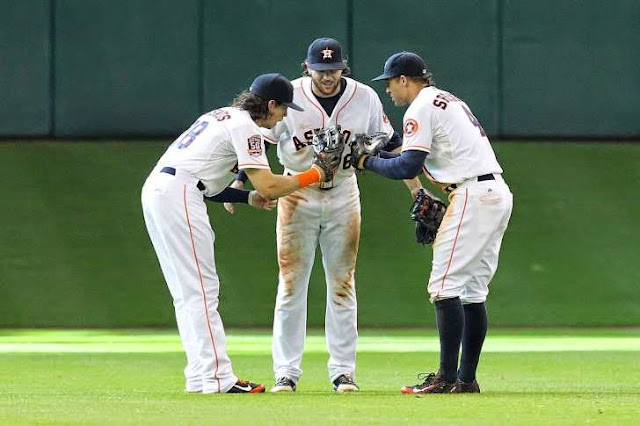 © Thomas B. Shea-USA TODAY Astros left fielder Colby Rasmus, center fielder Jake Marisnick and right fielder George Springer bow to each other after a win over the Athletics. From 2011-2014, Houston averaged 58 wins per season. Through the first quarter of the 2015 campaign, A.J. Hinch’s squad is on pace to win 102 games. While this pace will assuredly slow down as the season progresses, it’s amazing what the first-year Astros manager has been able to do.
It’s also important to note that general manager Jeff Luhnow had a long-term plan—a plan that seems to have finally made its way on to the diamond. The ridiculous amount of young talent that still hasn’t hit its stride thus far is a prime example of Luhnow sticking to his guns.
The likes of Luis Valbuena, George Springer and Jake Marisnick may be playing good baseball, but none of them have topped out at this point. Now enter into the equation blue-chip prospect Carlos Correa, and Houston’s offense could very well be among the best in baseball in the not-so-distant future.
It is, however, the team’s pitching staff that has it in first place right now. Dallas Keuchel (6-0, 1.67 ERA) is right in the thick of the Cy Young conversation at the quarter point of the season. Meanwhile, Collin McHugh is sporting a tidy 5-2 record. At 27-16 entering this weekend’s action, Houston is in prime position to contend for the American League West title through the duration of the season. That’s the biggest surprise around baseball right now, and it’s not even that close.

© Jared Wickerham/Getty Images Torii Hunter of the Twins hits a three-run double in the first inning against the Pirates on May 20. Speaking of first-year managers, Paul Molitor is doing a bang-up job for the Twins. Currently sitting at 23-18 and in the thick of the American League Central race, this Hall of Fame player has to be considered an early favorite for Manager of the Year. What he’s doing with an awkward mix of young players and previously under-performing veterans has to be applauded.
Torii Hunter (.281 average, six homers and 24 RBIs) has been a solid veteran presence in a lineup that has continued to out-perform even the most optimistic preseason expectations. He’s joined by Brian Dozier (seven homers, 20 RBIs) and Trevor Plouffe (six homers, 21 RBIs) to form a surprisingly effective group of hitters.
This success might not have staying power, especially in the difficult AL Central, but it should be recognized for what it is—an under-the-radar team exceeding expectations by a wide margin.

© Peter G. Aiken-USA TODAY Sports Royals third baseman Mike Moustakas singles against the Reds on May 20 at Kauffman Stadium.
Through the quarter point in the season, this former top prospect ranks sixth in the AL in batting (.333), ninth in on-base percentage (.387) and third in WAR (2.4). To put this into perspective, Moustakas is coming off a 2014 campaign that saw him hit .212 with a .261 on-base percentage. For the first time since making his debut in the majors back in 2011, Moustakas is living up to his potential at the plate. And it has paid off big time for the Royals.
With Moustakas putting up elite numbers, the likes of Lorenzo Cain, Alex Gordon and Kendrys Morales have some protection. This has enabled Kansas City to rank atop the American League in batting average through the quarter point in the season.

© Jake Roth-USA TODAY Sports Cubs third baseman Kris Bryant high-fives teammates after a 3-0 win over the Padres on May 21. There was little doubt that Chicago had a ton of young talent heading into the season. The question was whether this young talent would mesh will with the veterans on the roster. At this point in the season, that question has been answered.
As a team, the Cubs rank seventh in the National League in runs scored, fifth in home runs and fifth in on-base percentage. Anthony Rizzo, Chris Coghlan and Kris Bryant are all on pace for 20-plus homers. Meanwhile, Rizzo, Bryant and Miguel Montero are all hitting over .280.
However, it’s the Cubs pitching that has this team five games over .500 and in second place in the National League Central. Jason Hammel and Jake Arrieta are leading a pitching staff that ranks in the top half of the league in ERA and fifth in WHIP. This is with Jon Lester not fully hitting his stride. Once that happens, watch out.
While Chicago will be lucky to contend with the St. Louis Cardinals for the division title down the stretch, it can surely earn one of the two wild-card spots. That would make Joe Maddon’s first season as the team’s skipper a major success, especially considering this is likely the worst Cubs team we will see over the next half decade or so.

© Adam Hunger-USA TODAY Sports Mets right fielder Curtis Granderson reacts after grounding out against the Cardinals on May 19. Yet another team with tremendous young talent, not much was expected of Terry Collins' squad in a National League East that features the World Series favorite Washington Nationals. For New York, it’s the youngsters that have this team right in the thick of the division race one quarter of the way through the season.
Currently fifty points ahead of his batting average from last season, Lucas Duda is the only Mets hitter posting an average over .290. However, Curtis Granderson and Wilmer Flores both join him on a pace of 20-plus homers. Meanwhile, the Mets' staff is nearly dominating right now. Matt Harvey has posted a 5-1 record with a 1.98 ERA and a ridiculous 0.915 WHIP. Fellow youngster Jacob deGrom is also doing his thing with a solid 2.75/1.14 split.
Despite posting an 11-16 record since winning 11 in a row in April, the Mets still stand at five games over .500. Even if this team doesn’t compete for a playoff spot down the stretch, it’s shown enough young talent to be considered a factor over the long term. That much is for sure.

© David Zalubowski/AP Photo The Giants' Buster Posey follows the flight of his single in the sixth inning May 22 against the Rockies. The Giants are winning baseball games in an odd year. That’s been an exception to the rule in recent seasons. Winners of the World Series in 2010, 2012 and 2014, the Giants missed the playoffs in 2011 and 2013. Many expected this trend to continue after the team lost Pablo Sandoval to the Boston Red Sox in free agency. And once Hunter Pence went down for the first six weeks of the season, we figured the Giants would just wilt into mediocrity.
Winners of seven in a row and boasting a 15-5 record in the month of May, San Francisco has found itself right back in the National League West race. It doesn’t seem to matter who this team sends to the bump; that pitcher is getting it done. Tim Lincecum appears to have returned to 2011 form (more on that below), while Madison Bumgarner has picked up where he left off in the postseason last year. Heck, even Chris Heston is providing the Giants solid innings.
It is, however, the Giants' lineup that has been the most surprising. Buster Posey, Brandon Belt, Brandon Crawford and Angel Pagan are all hitting at or near .300. And after averaging just three runs per game in April, the Giants are up to five runs per game this month. Equally as important, the Giants put up three consecutive shutouts before Coors Field happened Friday night, and they have blanked their opponents seven times this month. That’s just insane.

© Thomas B. Shea-USA TODAY Sports Astros starting pitcher Dallas Keuchel pitches against the Athletics on May 20. There’s little doubt that Keuchel is currently the front runner for the American League Cy Young. He leads the league in wins (6), ERA (1.67), innings (64.2) and hits per nine innings (6.0). He’s gone at least six innings in all nine starts and has yielded zero earned runs in four starts. This all coming off a 2014 campaign that saw Keuchel post a 2.93 ERA in 29 starts while putting up his first 200-inning performance. Now a true staff ace, this 27-year-old starter will be one of the reasons Houston contends for a playoff spot late into the season.

© Bob Stanton-USA TODAY Sports Giants starting pitcher Tim Lincecum pitches during the first inning against the Dodgers on May 20. From 2012-2014, this two-time Cy Young winner put up a 32-38 record with an ERA of over 4.50. He even found himself demoted to the Giants' bullpen last year and in the playoffs over the past few seasons. Some figured that the 30-year-old's best days were behind him.
Despite a small sample size, Timmy has proven the naysayers wrong this year. He boasts a 4-2 record with a 2.08 ERA. The best thing about Lincecum’s turnaround is that he’s learned to pitch to his current strengths—ball placement, keeping batters off balance and controlling the strike zone. While no longer a staff ace, he can act as a solid No. 2 or No. 3 option on a good team. That is all the Giants need right now, especially with Bumgarner leading the rotation.
Nhãn: Sport