Erdogan's war on critical media heats up ahead of Turkish election

A+ A-
Print Email
A veteran U.S. journalist and author said on Wednesday President Tayyip Erdogan had blocked his honorary citizenship and declared him an enemy of the state, as the Turkish leader's war on critical media intensifies ahead of a June election. 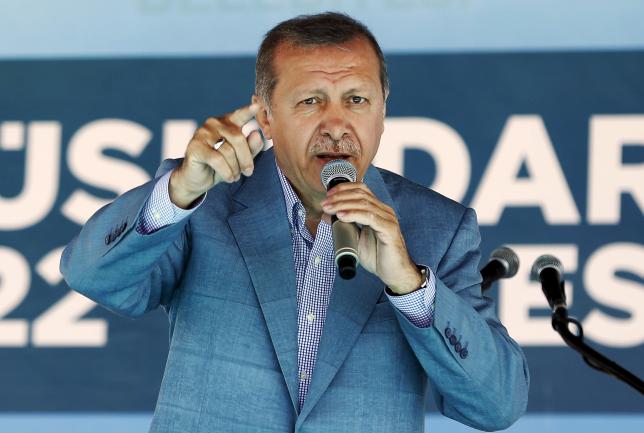 Turkey's President Tayyip Erdogan speaks during an opening ceremony in Istanbul, Turkey, May 26, 2015.

In what opponents see as part of a campaign to muzzle dissent, Erdogan has repeatedly berated news outlets including the New York Times and Turkish daily Hurriyet, while a prosecutor this month sought to shut two TV stations, seen as opposed to the government, on terrorism-related charges.
Erdogan is constitutionally barred from party politics as head of state, but has been making podium speeches across Turkey ahead of the June 7 polls in the hope the ruling AK Party will win a big enough majority to hand him greater powers.


"Hey New York Times, apparently you think you can give us a lesson on press freedom," Erdogan said in a speech in the western city of Usak on Wednesday, after the newspaper published an editorial that suggested he was engaged in "brute manipulation of the political process".
Addressing a crowd of thousands, Erdogan described the paper's journalists as "paid charlatans" and accused it of seeking to undermine Turkey over decades.
"At critical times, this newspaper's stories regarding Turkey have always smelled of provocation," he said.
Stephen Kinzer, a former Turkey bureau chief for the U.S. daily, traveled to the southern city of Gaziantep this week, expecting to be made an honorary citizen for his reporting 15 years ago which helped save endangered Roman mosaics.
But Kinzer, who has written books on the Middle East, said his embarrassed hosts at the city council had told him the award had been canceled on the personal orders of Erdogan due to a column he wrote in the Boston Globe in January.
Officials in Erdogan's office said they had no information about the matter, while the mayor's office in Gaziantep could not immediately be reached for comment.
"It’s odd to see a head of state so concerned about a few unflattering sentences that appeared in a newspaper thousands of miles away months ago. It brings me up to a level to which I never aspired," Kinzer told Reuters by phone from Gaziantep.
He said Gaziantep's mayor had been told he was "an enemy of our government and our country" because he wrote in the Jan. 4 column that Erdogan "sits in a 1,000-room palace denouncing the European Union, decreeing the arrest of journalists, and ranting against short skirts and birth control".
"What do you want from us?"
Erdogan rejects the notion that Turkey, which languishes near the bottom of international press freedom tables, has anything but a free media, declaring in January that Turkish journalists were freer than any in Europe.
But authorities have frequently used broadly defined anti-terrorism laws to prosecute journalists in the past, while dozens still face legal action for referring to a corruption scandal which erupted around his inner circle in December 2013.
Erdogan has also attacked the Hurriyet newspaper at recent rallies over a headline about the death sentence handed to former Egyptian president Mohamed Mursi, which noted that Mursi had been elected with 52 percent of the vote.
Erdogan, who also won 52 percent in a presidential election last August, suggested that the headline was a reference to him and was meant to imply that he should share the same fate.
Mursi's Muslim Brotherhood has close ties with the AK Party, which Erdogan founded, and he has taken the Egyptian leader's overthrow and subsequent treatment personally.
"What do you want from us? Why do you attack us with obvious injustices, obvious distortions," Hurriyet responded in an unusually blunt editorial last Friday, vowing to defend its right to free speech without fear.
A state prosecutor meanwhile this month sought to ban the Samanyolu and Bugun TV stations, local media said, both linked to the network of cleric Fethullah Gulen, whom Erdogan accuses of seeking to establish a "parallel state" and overthrow him.
Journalists at Gulen-affiliated newspapers and televisions stations have been detained in recent months and accused of "terrorism", including Ekrem Dumanli, editor-in-chief of the Zaman newspaper, who remains under a travel ban.
"I see a direct link with the elections," Dumanli told Reuters, saying the intention appeared to be to stop stories unfavorable to the government seeing the light of day.
"With the mentality of a dictatorship, someone can declare you an enemy, and lynch you with pre-prepared prosecutors and judges," he said.