A+ A-
Print Email
Farmer Juanito Masangkay heads out to the fields at night with a flashlight and a bow and arrow to get food for his wife and seven children. By hunting rats. 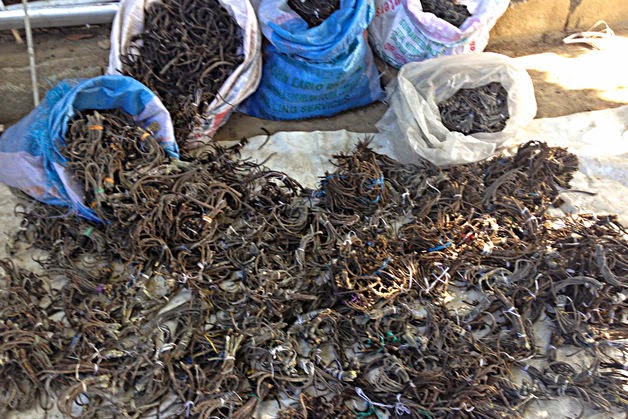 Rats' tails lay strewn across the ground and in T'boli town, South Cotabato province, Philippines, on May 14. 2015. Photo: Bloomberg

Masangkay and other Philippine farmers are some of the first to suffer the effects of this year’s El Nino, a weather event that alters climate patterns around the globe. A drought since February has forced him to look for alternative sources of food. The government gives him rice for the tails as part of a program to curb vermin that damage crops; the rats he eats.
“Sometimes we roast them, sometimes we cook them as adobo,” a popular simmered stew, Masangkay said while waiting in line to receive 30 kilos (66 pounds) of rice from the government at T’boli town in South Cotabato province. “We cut the tails, dry them and exchange them for rice.”
Climatologists have been predicting the return of El Nino for years and finally agreed this month that it’s back. There hasn’t been a severe El Nino since the 1997-98 event, which killed 24,000 people and caused $34 billion in economic losses, according to the U.S. National Oceanic and Atmospheric Administration.
Dry spell
Australia joined the U.S. and Japan this week in declaring the onset of an El Nino. Droughts in Australia and Southeast Asia may provide early indications of its intensity.
“There is still uncertainty over how strong El Nino will become,” David Dawe, a Bangkok-based senior economist at the United Nations’ Food & Agriculture Organization, said in an e-mail. “If El Nino aggravates drought conditions, rice crops are most likely to be affected in Indonesia, the Philippines and India, with Bangladesh possibly being affected as well.”
More than half the provinces in the Philippines are already suffering from a dry spell. That may undermine the Philippine government’s efforts to reduce inflation, Nomura Holdings Inc. said this month. The central bank on Thursday raised its consumer-price forecasts for this year and next, citing El Nino and a weaker peso.
Three out of 10 Filipino workers depend on agriculture for their livelihood, and the government is trying to minimize the impact of El Nino. It is fast tracking irrigation projects, building systems to collect rainwater and seeding clouds.
Programs like the bounty on rats’ tails help reduce crop loss and give direct support to families. With this year’s drought, farmers have taken up the offer in record numbers.
“It’s very ingenious: they have some meat, they also get rice,” Justina Navarrette, South Cotabato provincial agriculturist, said in an interview. The local government offers a kilo of rice for every 10 tails, and has bartered about 37,000 tails so far, she said.
More will come as El Nino takes hold. For about six hours each night, Masangkay joins other farmers in scouring the village to hunt the vermin, which weigh as much as a kilo each.
“They taste like chicken,” he said.