A+ A-
Print Email
Over 100 years ago this week, Marine Corps aviation was born.
On May 22, 1912, 1st Lt. Alfred Cunningham reported to the country’s first ever aviation camp at the Naval Academy in Annapolis, Maryland.
With only a little over two hours of training, he took to the skies, becoming the first Marine to ever embark on a solo training flight. Over the next year, he would make around 400 flights.  And while he ultimately gave up flying, the first Marine Corps aviator — and the father of Marine Corps aviation — remained an avid supporter of the program, and continued to contribute to its growth.
Originally, Marine Corps aviators operated under naval aviation. But as more Marines took to the skies, it became clear that the Corps needed its own aviation wing. And in 1915, then Commandant of the Marine Corps, Major General George Barnett, authorized the creation of a Marine aviation company.
To celebrate the anniversary of the birth of Marine Corps aviation, a video celebrating its history was released.  You can watch as the program evolves and changes, from using propeller aircraft to an emphasis on jets and helicopters. It’s a pulse-pounding look through 100 years of history that you won’t want to miss. 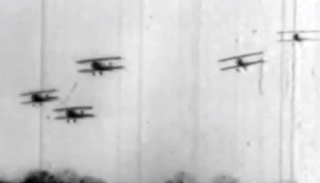