Forty migrants reported drowned in Mediterranean: Save the Children

A+ A-
Print Email
Around forty migrants died in the Mediterranean on Sunday, according to survivors of the journey who arrived on the southern Italian island of Sicily on Tuesday, local Save the Children spokeswoman Giovanna Di Benedetto said. 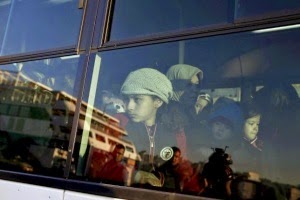 The deaths were reported by some of the roughly 240 migrants from Ghana, Gambia, Senegal and Ivory Coast who arrived in the port of Catania, another Save the Children spokeswoman said.
A Maltese merchant ship rescued the migrants from two rubber boats on which they had set off from Libya, where lawlessness has been exploited by traffickers who can charge thousands of dollars to people looking for a better life in Europe.
Three of the roughly 137 survivors from one of the boats told the charity that dozens of people fell into the sea when they saw the merchant ship approach and then drowned because they could not swim.
Save the Children said five bodies had been brought to Catania but it was not yet clear whether they were among those who fell into the sea or if they died on the packed dinghy.
Some survivors said around 40 had died while others simply said "lots" of people lost their lives, Di Benedetto said, adding that one dinghy may have exploded or deflated in the heat of the sun.
Around 100 people were on the other boat, from which there were no reported deaths. There are at least 32 minors among the survivors, two of whom are between five and seven years old, Save the Children said.
Numbers risking the journey from north Africa in rickety boats have risen further in recent weeks since up to 900 people are believed to have drowned last month in the worst Mediterranean shipwreck in living memory.
Around 7,000 migrants were rescued from overcrowded boats over the weekend and on Monday, and 10 dead bodies were recovered, Italy's coast guard said. About 1,800 people are believed to have died during the crossing from Africa to Europe so far this year.
The vast majority of the migrants leave from Libya. Some 51,000 have entered Europe by sea, 30,500 via Italy, according to the UN refugee agency.