A+ A-
Print Email
WASHINGTON — Many people think they know what marriage is about: love, fidelity and the forming of stable families to raise children.
But to hear the legal opponents of same-sex marriage, that represents flawed thinking.
As the Supreme Court justices listened this week, at times with noticeable puzzlement, the attorney defending Michigan's ban on gay marriages said that although people may say "that marriage is all about love and commitment," in truth "the state doesn't have any interest in that."
"What the state cares about is biological reality," John J. Bursch, a special state attorney, told the court. 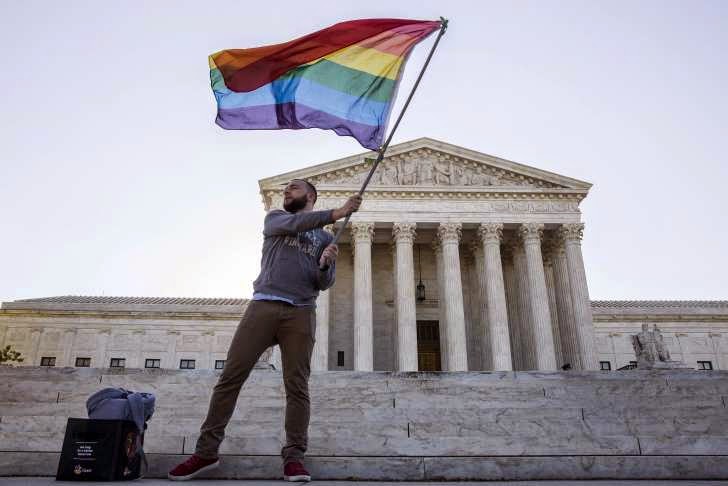 The underlying rationale for state marriage laws is not about adults pledging a lasting commitment to each other or fostering a stable household, he said. It is only about "binding children to their biological mom and dad."
On Friday, the justices meet behind closed doors to discuss the marriage cases and to vote on whether to uphold or strike down the remaining state laws denying marriage to same-sex couples.
During Tuesday's arguments, some key members of the court, particularly Justice Anthony M. Kennedy, expressed qualms about a ruling that would declare a constitutional right for same-sex marriage.
But when the justices go around the conference table and state their views, many analysts expect the majority, including Kennedy, will set aside those doubts. If that happens, the chief reason probably will be that they could not accept the state's narrow — and, to some, surprising — explanation for what marriage is all about.
In constitutional law, states may usually enforce legal distinctions among their citizens, so long as they have a "rational basis" for doing so. A state may legally say, for example, that people over a certain age must be retested to prove they can still safely drive.
Finding a rational basis for a law is usually not hard. But in case after case over the last few years, lawyers for states have turned in circles trying to give a rationale for denying marriage licenses to committed gay couples.
Their problem is that the Supreme Court, led by Kennedy, has backed them into a corner.
In 2003, Kennedy wrote a landmark opinion for the court that struck down the last state laws that made gay sex a crime. In doing so, he wrote that moral disapproval is not a valid justification for discriminatory laws that "demean" gay couples. Previous court decisions had ruled out another possible justification: that a law or practice has been customary for many years.
When the 2003 decision was announced, Justice Antonin Scalia, in his dissent, predicted that eliminating moral disapproval as a rightful basis for a law would open the door to same-sex marriage. And, indeed, a few months later the highest court of Massachusetts became the first to declare gay couples had a right to marry. That set in motion state-by-state challenges to laws limiting marriage to a man and woman.
As the laws were steadily struck down, lawyers defending them scrambled to come up with a rational basis they could assert that did not rely on tradition alone or on the state's view of homosexuality as sinful.
They settled on procreation: Opposite-sex couples need to marry because they can have children by accident, the argument goes. The state wants to encourage them to wed, so it can legally limit marriage to them alone.
In the current case, Michigan has denied a marriage license to two women, Jayne Rowse and April DeBoer, who are raising four foster children who had been abandoned by their mothers. The women, both nurses, were permitted to adopt the children, but only as individuals, not as a couple.
When asked why the state would exclude these women from marrying, Bursch insisted the decision had nothing to do with disapproval of their relationship. The fact the women were gay was not the problem, he said.
"Oh, gosh, no. The state doesn't care about your sexual orientation," Bursch told Justice Elena Kagan. "We're not drawing distinctions based on the identity, the orientation or the choices of anyone. It's not meant to exclude."
The state's concern, he said, is that allowing the women to marry would have an effect on the rest of society. It would "de-link the idea that we're binding children with their biological mom and dad."
But what about adopted children, asked Justice Stephen G. Breyer. Shouldn't their parents also be allowed to marry?
"We love adoptions. Adopted parents are heroic," Bursch said, but "that's an entirely different social issue."
If opposite-sex adoptive parents marry, the state doesn't see a problem with de-linking marriage and procreation in people's minds, but same-sex couples marrying would pose that problem, he explained.
The more Bursch spoke, the less convinced several of the justices sounded.
At one point, Kennedy said he was waiting to hear "some kind of rational or important distinction." When Bursch tried, Kennedy politely disagreed.
The premise "that only opposite-sex couples can have a bonding with the child," Kennedy said, "that's very interesting, but it's just a wrong premise."
Two years ago, Kennedy spoke for the court in striking down part of the federal Defense of Marriage Act. It infringed "the equal dignity of same-sex couples," he said.
When Bursch said marriage had nothing to do with dignity and emotional commitment but only sex and biology, Kennedy sounded offended.
"That assumes that same-sex couples could not have the more noble purpose, and that's the whole point," he said. "Same-sex couples say, 'Of course, we understand the nobility and sacredness of marriage. We know we can't procreate, but we want the other attributes of it in order to show that we too have a dignity that can be fulfilled.'"
Bursch made one more try. "Justice Kennedy, to be perfectly clear, the state of Michigan values the dignity and worth of every human being, no matter their orientation or how they choose to live their life. That's not what this case is about."
It's the justices, of course, who will decide what the case is about. And if five of them decide that marriage is about commitment and dignity more than simply biology, the odds are strong that when they issue their ruling, probably in June, the remaining laws against gay weddings will be abolished.