A+ A-
Print Email
An Iranian aid ship is approaching Yemen’s coastline, raising the risk of a showdown with the Saudi-led military coalition blockading Yemeni ports as it battles the country’s Shiite Houthi rebels. 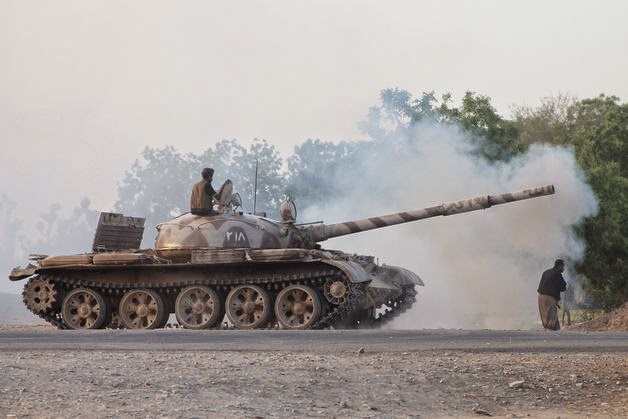 The ship carrying food and medicine entered the Gulf of Aden on Sunday, according to Iranian media. Iran’s navy has vowed to protect the vessel, and the government said it won’t allow any country that’s part of Yemen’s war to inspect the cargo. The vessel will arrive at Yemen’s Red Sea port of Hodeidah on May 21, according to a state TV reporter on board.
The voyage is a direct challenge to the Saudi-led blockade and comes as the two nations vie for regional dominance. A confrontation near the Suez Canal and key oil transit routes would further destabilize a region rocked by conflicts from Iraq to Syria and Libya.
“There is the potential for this ship to push the conflict to another level,” Ibrahim Sharqieh, deputy director of the Brookings Doha Center, said by phone.
Saudi Arabia assembled a coalition of Sunni-ruled nations in March to bomb the Houthis after the group ousted a Yemeni president backed by the six-nation Gulf Cooperation Council. The UN estimates that 1,500 have been killed during the two-month conflict. A five-day humanitarian truce, punctuated by persistent clashes, expired on Sunday.
Saudi Arabia and Iran are already on opposite sides of some of the Middle East’s worst conflicts. In Yemen, Saudi Arabia and its Gulf Arab allies accuses the Houthis of being tools of Iran, a claim Western diplomats view with skepticism.
UN agreement
The aid ship, which left Iran’s southern port of Bandar Abbas on May 11, is carrying about 2,400 tons of food and 100 tons of medical aid, Fars news agency reported. Doctors, aid workers and journalists are also on board.
Alaeddin Boroujerdi, head of the Iranian parliament’s national security and foreign policy committee, said an agreement with the United Nations allows the ship to dock at Hodeidah. That conflicts with a letter to the UN from Yemen’s government-in-exile, which, according to Saudi-owned Al Arabiya television, said all aid must be coordinated with the Saudi-led coalition.
“Neither Saudi Arabia nor any of the countries belonging to the coalition have the right to inspect the Iranian ship,” Boroujerdi said.
Saudi Arabia said it started the bombing campaign to restore the government of President Abdurabuh Mansur Hadi and force the Houthis to resume talks to resolve a power struggle that brought the country to the verge of collapse.
Peace talks
The rebels and their allies on Sunday shunned peace talks in the Saudi capital Riyadh that were attended by Yemeni politicians and Gulf Arab diplomats. Hadi, who fled to Saudi Arabia in March after being ousted by Houthi forces, met with other Yemeni politicians to discuss how to unify the country.
Hadi called on Yemenis to be patient, saying a growing number are being displaced. Yemeni parliament member Abdulaziz Al-Jubari labeled the meeting a “peace conference.”
“We call upon all parties involved in this war to return to their senses before it’s too late,” Al-Jubari said in a speech.
The Houthis, who say they’ve been marginalized for decades by the government, ruled out Saudi Arabia as a venue for talks and reject Hadi’s leadership. They also deny being proxies of Iran. Defectors of the People’s General Congress party, which is led by former President Ali Abdullah Saleh, attended the Riyadh meeting. Saleh has allied himself with the Houthis.
Ismail Ould Cheikh Ahmed, the UN envoy to Yemen, said the world body will arrange another conference soon that involves all political parties in Yemen.
While the Riyadh meeting is a positive step, there needs to be more engagement with the Houthis and Saleh’s political party, said Brookings’ Sharqieh. In addition, there should be direct talks with Iran over the crisis, and Iran should not politicize humanitarian aid, he said.
“There is no military solution to the crisis in Yemen,” Sharqieh said. “The only solution to the crisis in Yemen is dialogue and engagement by all parties.”