A+ A-
Print Email
Fighting between Islamic State militants and the Syrian army was reported on Saturday near an ancient citadel in the historic city of Palmyra, the target of a big offensive by the jihadist group that has raised concern for the U.N. world heritage site. 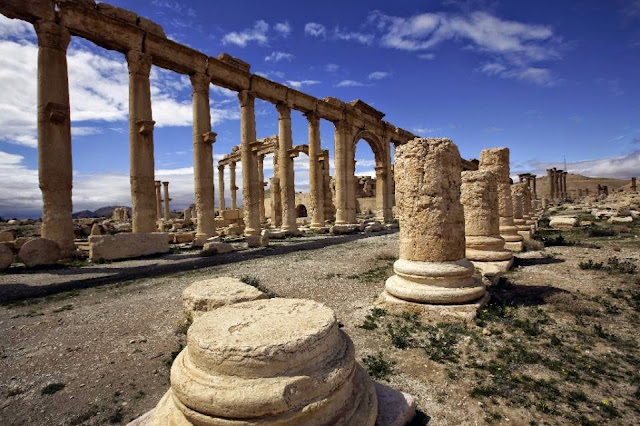 A partial view of the ancient oasis city of Palmyra, 215 kilometres northeast of Damascus, Syria, on March 14, 2014

The Syrian Observatory for Human Rights, a UK-based group that reports on the war, also said Islamic State militants had executed 23 people on Friday including nine minors and five women in areas seized from state control outside the city.
A Syrian military source said Islamic State was keeping up its attack but at "a far distance" from the city which had been secured with army reinforcements. Fighting continued on Saturday but at a lower intensity.
Palmyra, also known as Tadmur, is home to extensive ruins of one of the most important cultural centres of the ancient world. It was put on UNESCO's list of World Heritage in danger in 2013.
Islamic State, which espouses a puritanical Islamist ideology, has destroyed antiquities and ancient monuments in Iraq. The government's antiquities chief has said the jihadists will destroy Palmyra's ruins too if they take the area.
Palmyra is also of strategic importance, sitting at a highway intersection linking it to the cities of Homs and Damascus, some 240 km (150 miles) to the southwest.
The mass execution reported by the Observatory is the second such killing it has recorded since Islamic State advanced this week into the area. In the first, the Observatory said the jihadists had executed 26 men, beheading 10 of them.
The Syrian military source said there had been one massacre of 30 or more people in that area, including elderly men.
The Syrian military has been mounting air strikes against Islamic State fighters in the area. Rami Abdulrahman, who runs the Observatory, said the sides were fighting near a military intelligence building in Palmyra on Saturday.
Fighting was also reported at a gas field to the east of Palmyra. A statement posted by Islamic State supporters on Twitter said the group had taken large parts of the gas field. The military source said that attack was also repelled.
The Islamic State offensive in central Syria has added to the pressures facing government forces that have faced significant setbacks since late March in the four-year-long war.
Other insurgent groups fighting President Bashar al-Assad have seized control of wide areas of the northwestern province of Idlib since late March. Assad has also lost a border crossing with Jordan in the south.
This week the Syrian army and the allied Lebanese group Hezbollah have driven insurgents from wide areas of the mountainous region to the north of Damascus, shoring up Assad's grip over the border zone between Syria and Lebanon.