A+ A-
Print Email
US Secretary of State John Kerry held talks with Sri Lanka's top Tamil leaders on Sunday as he wrapped up an overnight visit pushing reconciliation in the island after decades of ethnic war. 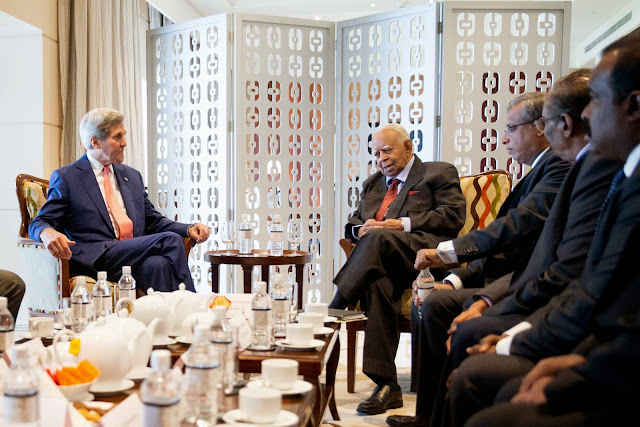 Kerry met with heads of the Tamil National Alliance (TNA), the main political party from the ethnic minority, one day after holding talks with Sri Lanka's new President Maithripala Sirisena and his government.
US officials said TNA leader Rajavarothiam Sampanthan and several other senior party officials held talks at Kerry's hotel in the capital Colombo.
The top US diplomat, whose presence in Colombo marked the island's return to the world diplomatic fold, heaped praise on the new government of Sirisena who toppled former strongman Mahinda Rajapakse at January elections.
Kerry pledged support to ensure "true reconciliation" in Sri Lanka six years after the end of its 37-year-old Tamil separatist war which claimed at least 100,000 lives.
Giving a speech on Saturday, Kerry echoed a long-standing Tamil demand to investigate the cases of thousands who went missing in the final stages of the brutal conflict that ended in May 2009.
"Try to find wherever the truth may lead. No matter how painful that truth is," Kerry said. "It's the right and the humane thing to do - and it is, believe it or not, an essential part of the healing process."
The TNA is in the opposition, but supports Sirisena's administration which has also promised to investigate allegations that up to 40,000 Tamil civilians were killed by troops under Rajapakse's command.
Kerry has promised technical assistance for any probe and also urged Sirisena to free hundreds of Tamils who are still being held without any charges against them.
During Rajapakse's decade-long rule, Washington was close to slapping sanctions on Colombo for refusing to allow investigations into claims of mass killings and rights abuses at the end of the war between the separatist Tamil Tigers and government forces.
As Sri Lanka's relations with the West and regional powerhouse India soured, Rajapakse turned increasingly to Beijing, with Chinese-funded investments projects springing up across Sri Lanka.
Since coming to power, Sirisena has tried to reset the diplomatic balance, choosing New Delhi for his first foreign visit and offering the hand of friendship to other key players who fell out with his predecessor.
Kerry is due to fly to Nairobi after meeting with US embassy staff in Colombo.