A+ A-
Print Email
U.S. Secretary of State John Kerry will leave China "in absolutely no doubt" about Washington's commitment to freedom of navigation and flight in the South China Sea when he visits Beijing this weekend, a senior State Department official said on Wednesday. 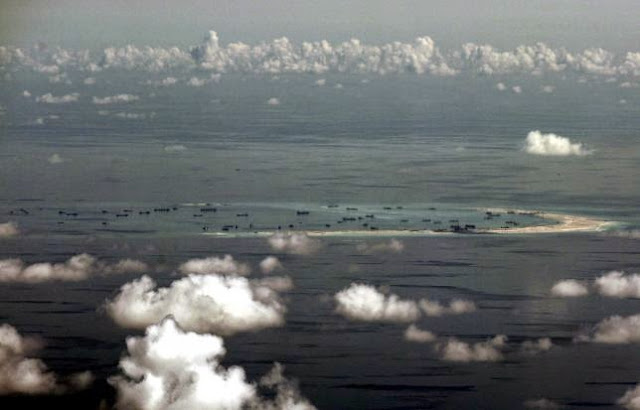 An aerial photo taken though a glass window of a Philippine military plane shows the alleged on-going land reclamation by China on mischief reef in the Spratly Islands in the South China Sea, west of Palawan, Philippines, May 11, 2015. Photo: Reuters/ Rit

Kerry will also tell Chinese leaders that China's large scale land-reclamation work in pursuit of territorial claims in the South China Sea could have negative consequences for regional stability and relations with the United States, the official told reporters.
The official spoke a day after a U.S. official said the Pentagon was considering sending U.S. military aircraft and ships to assert freedom of navigation around rapidly growing Chinese-made artificial islands in disputed South China Sea.
China's Foreign Ministry said on Wednesday that Beijing was "extremely concerned" and demanded that the U.S. issued a clarification of the remarks.
The senior U.S. official said "the question about what the U.S Navy does or doesn't do is one that the Chinese are free to pose" to Kerry in Beijing, where he is due on Saturday and Sunday for meetings with civilian and military leaders, including President Xi Jinping.
"He will leave his Chinese interlocutors in absolutely no doubt that the United States remains committed to maintaining freedom of navigation and to exercise our legitimate rights as pertaining to over flight and movement on the high seas," the official said.
"That won't change, and not only for us, and not only in the South China Sea, but internationally and as a global matter, that's a principle we are determined to uphold."
Kerry would "reinforce to them the very negative consequences to China's image and China's relationship with its neighbors on regional stability and potentially on the U.S.- China relationship from their large-scale reclamation efforts and the behavior generally in the South China Sea," the official said.
The U.S. official who spoke on Tuesday said U.S. Defense Secretary Ash Carter had requested options that include sending aircraft and ships within 12 nautical miles (22 km) of reefs that China has been building up in the Spratly island chain.
Such a move would directly challenge Chinese efforts to expand its influence in the maritime heart of Southeast Asia.