Liberia declared Ebola-free after weeks of no cases

A+ A-
Print Email
The World Health Organization (WHO) has declared Liberia free of the Ebola virus, confirming that the country has had no new cases in 42 days. 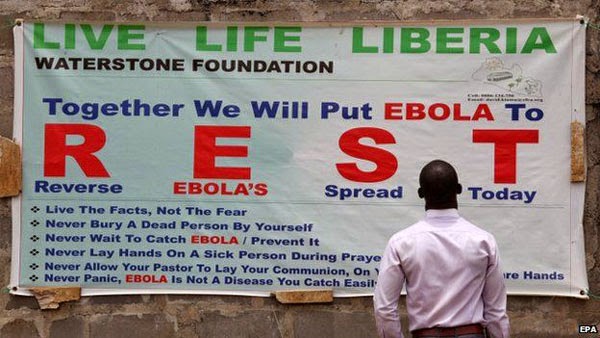 A poster in Paynesville, outside the capital Monrovia - part of the Liberian campaign against Ebola

President Ellen Johnson Sirleaf told the BBC that Liberia had "crossed the Rubicon" and would be celebrating a concerted effort to stem the disease.
More than 4,700 deaths from Ebola have been recorded in Liberia, more than in any other affected country.
Neighbouring Guinea and Sierra Leone continue to fight the outbreak.
It has claimed over 11,000 lives across the region since last year.
The WHO regards a country Ebola-free after a 42-day period without a new case - twice the maximum incubation period.
The last confirmed death in Liberia was on 27 March. On Saturday the World Health Organization said in a statement: "The outbreak of Ebola virus disease in Liberia is over."
President Sirleaf told the BBC: "We will celebrate our communities which have taken responsibility and participated in fighting this unknown enemy and finally we've crossed the Rubicon. Liberia indeed is a happy nation."
Traumatised nation
Officials say Ebola was eventually conquered in Liberia through a collective effort. Care centres and hand-washing stations were set up to try to halt the disease, which spreads through contact with sick people.
Billboards went up with slogans such as "Ebola is real", "Wash your hands and don't touch" and "Don't be the next victim".
"It has been a terrible time in the history of our country," Monrovia resident Emmanuel Tokao wrote on a BBC Facebook page. "I'm firstly grateful to God, who I believe brought us back to normality."
At the height of the outbreak, he said, "ambulances would either come for a dead body or sick person. It reminded me of the war days".
Liberia lost around 250,000 lives in a civil war ending in 2005.
The BBC's Jonathan Paye-Layleh in Monrovia says the president gave a sense of how traumatised the outbreak remains after the outbreak.
In an address to the nation on Saturday, she said: "Even today if you hear an ambulance siren you shake a little bit."
Although Liberia has now been declared Ebola-free, correspondents say the outbreak will have a long-term impact on Liberia's fragile economy.
The current outbreak is the deadliest in history. It initially centred on Guinea's remote south-eastern region of Nzerekore in early 2014, and later spread to Liberia and Sierra Leone.
The WHO is warning against complacency. Its statement warns that there is "a high risk that infected people may cross into Liberia over the region's exceptionally porous borders".
Source: BBC
Nhãn: World-Region