Marcus Mariota leads NFL in jersey sales for May

A+ A-
Print Email
By Vincent Frank
Tennessee Titans quarterback Marcus Mariota has yet to even suit up for an NFL game, but he’s already accomplished a feat that no other quarterback in franchise history has.
Mariota is currently leading the NFL in jersey sales for the month of May. 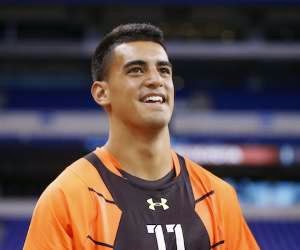 You read that right. He’s ahead of the Richard Sherman’s, Peyton Manning’s and J.J. Watt’s of the world.
While this would seem to be surprising on the surface, it really isn’t. Mariota is the reigning Heisman Trophy winner. He led Oregon to the College Football Playoff title game this past January. And in reality, his clean off-field image is much more attractive to the masses than Jameis Winston, who went one pick ahead of Mariota in the 2015 NFL draft.
Looking back to April through October of 2014, there was only one rookie in the top 10 in jersey sales. Cleveland Browns quarterback Johnny Manziel ranked third behind Peyton Manning and Russell Wilson. Colin Kaepernick and Tom Brady were also in the top five during that span.
Good for Mariota. It’s now time to see if his marketing success will be accompanied by on-field success. He’s expected to start for the Titans out of the gate.
Nhãn: Sport