A+ A-
Print Email
More than 5,800 migrants have been rescued and 10 bodies recovered off the Libyan coast over the weekend, the Italian coastguard says. 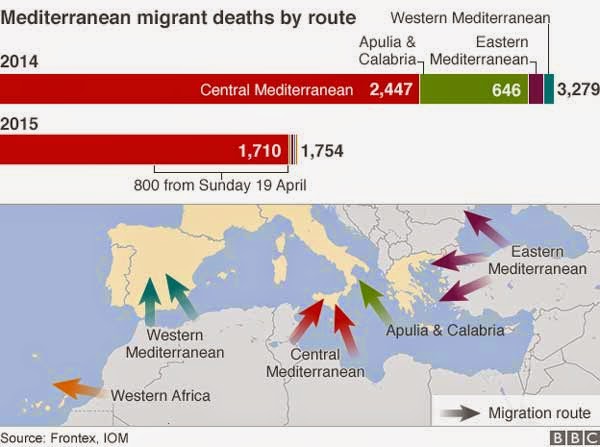 The survivors were picked up from wooden and rubber boats, in 17 separate operations by Italian and French ships.

An Italian ship landed nearly 900 people in Sicily early on Monday.
At least 1,750 people have died this year trying to cross the Mediterranean, a 20-fold increase on the same period in 2014 when 96 people died.
The final number of people rescued over the weekend is expected to rise. The busiest two days for rescues so far this year were April 12 and 13, when 6,500 people were picked up.
Many more migrants are expected to make the crossing in the coming weeks as smugglers take advantage of calmer weather.
In a separate incident on Sunday, three people died when a boat carrying migrants to Europe sank off Egypt's coast, according to Egyptian state media. Thirty-one migrants were reportedly rescued.
At an emergency meeting last month to discuss the crisis, European Union leaders said they would triple the funding for rescue operations run by EU border agency Frontex, and threatened to target smugglers' boats with military strikes.
Italy abandoned its Mare Nostrum search-and-rescue mission last year after some EU members - including the UK - said they could not afford to fund it.
The decision was widely criticised in April after more than 800 people died when a single boat sank - the deadliest capsize recorded in the Mediterranean.
Some of the 27 survivors of the accident described being beaten by smugglers in an attempt to load more migrants on to the boat
The overloaded vessel crashed into a cargo ship shortly after leaving Libya, causing panic on board. The dead were mostly Syrians, Senegalese, Eritreans, and Somalis - adults and children.
The UN refugee agency (UNHCR) has said "much more" needs to be done beyond the EU's current spending plans to tackle the migration crisis in the Mediterranean.
Source: BBC
Nhãn: World-Region